Traffic patterns and lane markings around the country are changing as cities and states come around to the fact that more lane miles for cars will not solve our transportation issues. Cities have begun installing bike lanes and sharrows. However, many people do not understand these new lane configurations, or know what the markings mean. Fear not! Here is a quick guide to four things you will likely encounter out on the roads – 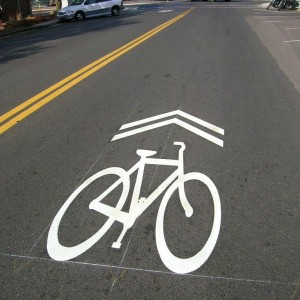 This symbol is a “Sharrow” (a cross between “share” and “arrow”) or “Shared Lane Bicycle Marking”. They are painted on roadways as a reminder to motorists that bikes may be present on the road, and yes, they are legally allowed to take the full lane. In addition to offering motorists a visual reminder that bicycles exist and may be present in traffic, sharrows offer an ‘ideal line’ for cyclists to take. When there is on street parking they are typically placed 11-feet from the curb to guide cyclists away from the door zone. Where there is no on-street parking the sharrow is painted 4-feet from the curb. This distance keeps cyclists out of the debris zone, and discourages unsafe passing by cars. Sharrows should not be mistaken for actual bike infrastructure, and we do not endorse them as an acceptable treatment where there is room for dedicated lanes. 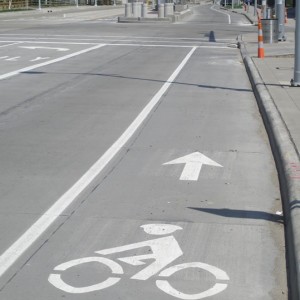 This is a dedicated bike lane. Most people are familiar with these, but some elements of bike lanes are not commonly known. Bike lanes designate an exclusive space for bicyclists through the use of pavement markings and signage, and enable cyclists to ride at their preferred speed without interference from prevailing traffic conditions. Bike lanes are typically on the right side of the street, between the adjacent travel lane and curb, road edge, or parking lane and flow in the same direction as motor vehicle traffic. Cars may not travel or park in the bike lane, and cyclists may leave the bike lane at any time to pass, avoid obstacles, or to turn left. Moreover, cyclists do not have to travel in the bike lane if they don’t want to. 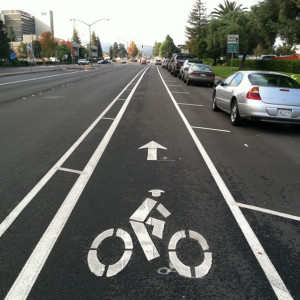 This is a buffered bike lane. Buffered bike lanes are conventional bicycle lanes paired with a designated buffer space separating the bicycle lane from the adjacent motor vehicle travel lane and/or parking lane. These work exactly the same as regular bike lanes but improve safety because they provide space for cyclists to pass other cyclists without encroaching into the adjacent motor vehicle travel lane, and when on the parking side reduce the risk of car doors being opened into the cyclists’ path of travel. The buffer zone is not intended to be traveled in and is supposed to remain a void separating cars and bikes. 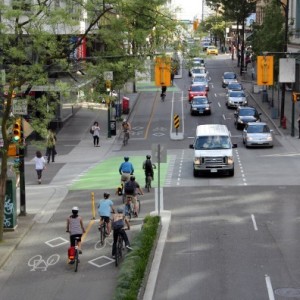 This is an example of a protected bike lane; the ideal infrastructure for cyclists. A protected bike lane is physically separated from motor traffic and distinct from the sidewalk. Protected bike lanes have different forms but all share common elements—they provide space that is intended to be exclusively used for bicycles, and offer complete separation from cars, parking, and sidewalks. This eliminates the risk of cars and bikes straying into each other’s lanes, prevents double parked cars from blocking the bike lane, and increases comfort and feelings of safety for all cyclists. Cleveland is currently attempting to implement such lanes as part of The Midway – Cleveland’s Bicycle Network, and have recently applied for $60,000 in NOACA funding to advance the project.

These are just four types of bicycle infrastructure you might encounter. There are many variations of these configurations, but they are all intended to do the same thing; make our streets safer for cyclists. The statistics pointing to the benefits for bike friendly infrastructure on our streets are extensive, and not just for cyclists. Pedestrians and motorists have a lot to gain in addition to the larger neighborhood and economic improvements.