Update 9/28/2018: The TSBTBs described below are now complete at both ends of the Detroit-Superior bridge. 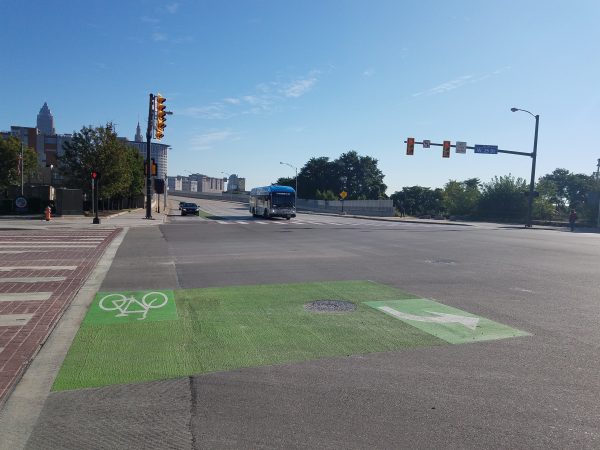 Intersections are complicated places, and bicycles face many dangerous situations in them. Bike lanes get you down the road, and continuing straight or turning right generally do not pose many issues.  But the left turn is another matter. Cyclists often have to make a multi-lane crossing maneuver to reach the left turn lane. Looking over your shoulder at traffic approaching from behind while negotiating across several lanes is uncomfortable for seasoned riders, and can be downright terrifying for novices. The timing is critical. 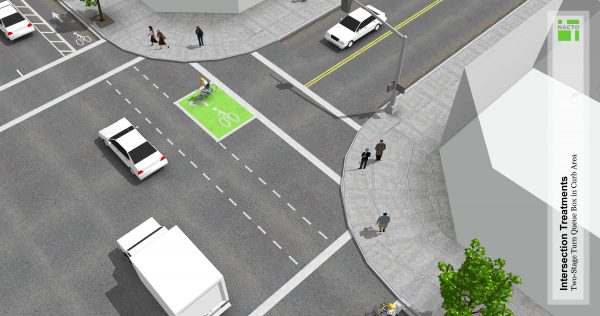 Instead of making this maneuver, cyclists continue riding forward to a Bike Box and then re-position to continue in their intended direction upon the next signal. In the image above, the rider has come from the lower right of the image, turned tightly left into the box, and is now waiting for the signal to continue forward.

In the image below, you can see that cars and bicycles continue along their regular paths of travel, while the cyclist in red has now maneuvered into the box and is waiting for the next signal. 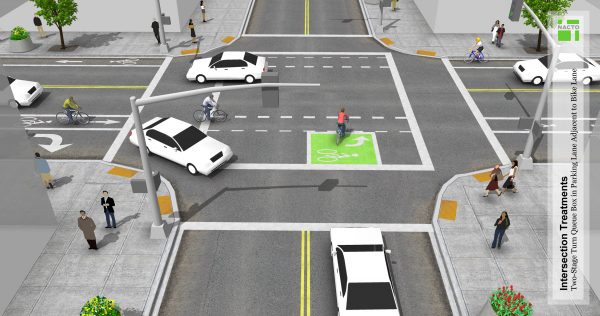 Upon the next signal change, the rider in red now continues on – never having to make the difficult merge mentioned before.  Downside? It may take a little longer for riders – but the gains in safety are well worth it. And, riders that wish to use the traditional left turn lane are free to do so.

Why does this matter? This Two Stage Bicycle Turning Box arrangement is now used used at both ends of Detroit-Superior Bridge as part of the completed design.