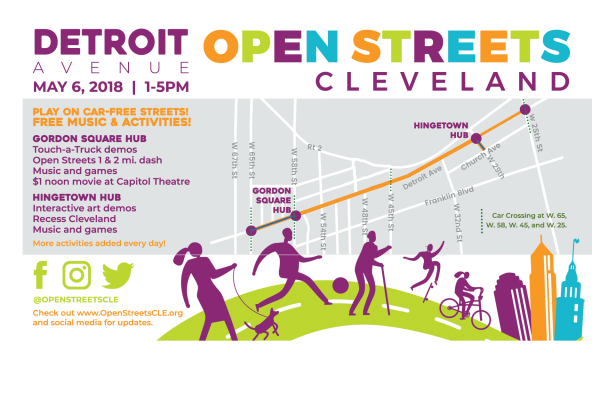 The Gordon Square Hub at W. 65th Street features a noon $1 screening of Pee-Wee’s Big Adventure at the Capitol Theatre, an Open Streets 1 and 2 mile dash kicking off at 1:30, and youth dance, Zumba, yoga, and pilates throughout the afternoon. Music will be provided by DJ Blackfire.

May is National Bike Month, and Open Streets Cleveland is the place to be to get ready for the season! Free bicycle safety checks, youth helmet giveaways, and a bicycle skills rodeo course will be available, along with a helmet decorating station, smoothie-making blender bicycle, bicycle polo, and a demonstration of the proposed Midway Protected Cycle Track.

The Touch-a-Truck Hub at W. 45th St. presents the opportunity to sit in the seats of some of Cleveland’s biggest and loudest vehicles. Cleveland Fire, Police, and EMS, MetroHealth LifeFlight, RTA KidsWatch, Mom’s First, and University Hospitals Bike Medics will be on hand. Resource tables include Lifebanc, Cleveland Community Relations, United Healthcare, and the Detroit Shoreway Community Development Organization Safety Committee. Play basketball and other pickup games to tunes from DJ Tito, the Party Rican.

The Hingetown Hub features a fusion of art and movement. Near W. 29th Street, attendees can rollerskate with Rollin’ Buckeyez, play with Recess Cleveland, make art with the Cleveland Museum of Art’s Studio Go van, and get faces painted and bikes decorated in preparation for a bike parade at 4:00pm led by SPACES Gallery. A pop-up Possibility Park on W. 29th Street will jog imaginations. Through a partnership with Hingetown Culture Works, various artists will present interactive exhibits reflecting on space and movement, including:

Resources and demonstrations from TITLE Boxing, Mariner’s Watch, the Music Settlement, the Centers for Families and Children, Cleveland Rocks!, and ICA Art Conservation will be available.

Food along the route:

How to Get There

From 12:00 to 6:00, Detroit Avenue will be closed to cars for the Open Streets Cleveland event. Cross traffic will be permitted at W. 25th Street, W. 45th Street, W. 58th Street, and W. 65th Street. The event is accessible by foot, bike, and transit, as well as personal vehicles.

Thanks to our Neighborhood Sponsors!

For more information about Open Streets Cleveland, including to sign up as a programmer, volunteer at the event, or sponsor, visit www.OpenStreetsCLE.org.