As we prepare to bring in the New Year, I find it’s always good to look back on the previous one and remind yourself where you’ve been, what you learned, and how you can make the next one better. So without further ado, here’s some of what we’ve been up to this year. Your membership makes all of the following possible. Join us!

Bike Share
When the opportunity for federal funding presented itself, we wasted no time in figuring out how we could use it to bring bike share to Cleveland in 2016. We found great partners in Mike Foley and Shanelle Smith of the Cuyahoga County Department of Sustainability. Together, we applied for and were awarded $357,000 from NOACA, and Bike Cleveland raised the $89,000 in local match. We’re using it to launch 250 bikes with Cyclehop-Sobi next summer, and have plans to grow the system to 700+ bikes encompassing downtown, University Circle, and Ohio City! What better way to get people riding than to give everyone access to bicycles! 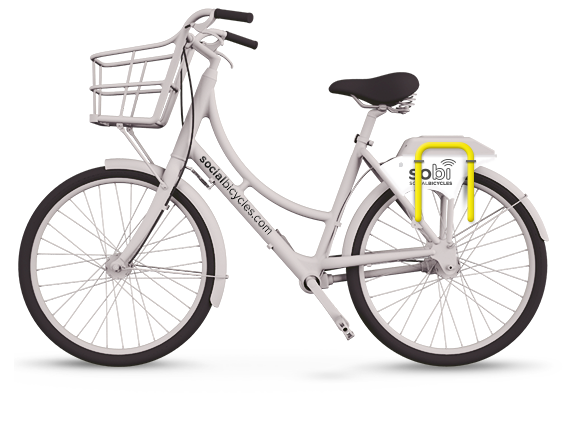 We’re All Drivers
Did you see it? Did you see it?! We launched a major public awareness campaign this year entitled “We’re All Drivers” because when we are out on our bikes, we are legal road vehicles with the same rights, and worthy of the same respect, as people in cars. TV, radio, billboards, bus ads, Facebook, YouTube, and other digital outlets all ran iterations of the campaign. All told we had over 209 MILLION media impressions, and even featured local legend Sandy Alomar Jr. as our “Line Driver.” We’re going to bring it back with a few tweaks and lessons learned in 2016. Remember, We’re #AllDrivers 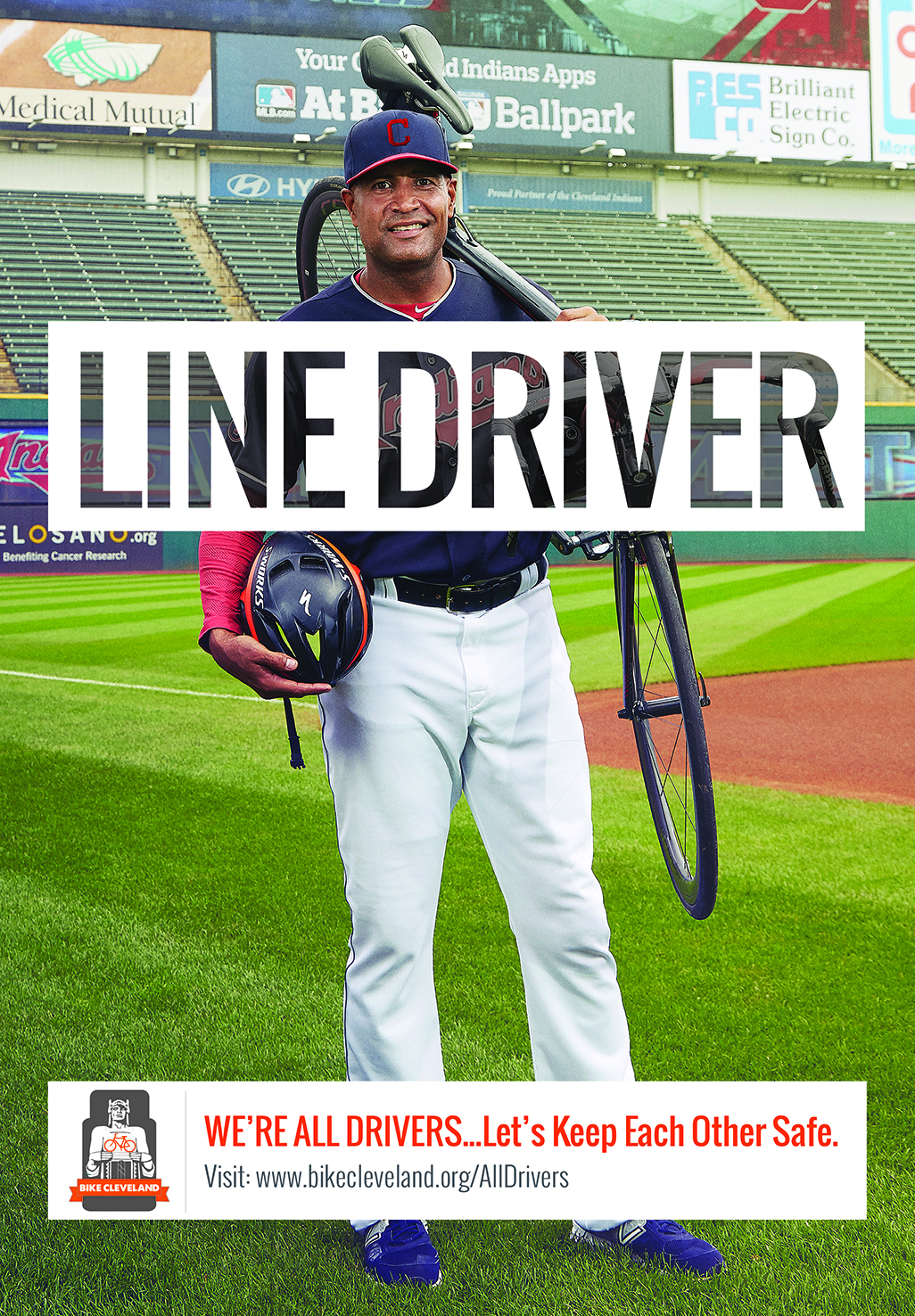 Random Acts of Brightness
Not only is it unsafe to ride at night without lights, it’s also illegal! Problem is, quality bike lights and batteries aren’t cheap, and for low income residents who ride for necessities sake, an expense that is difficult to meet. What to do about this problem? Give people free lights! We secured grant dollars to buy hundreds of front and rear lights, and with the help of volunteers we spent the summer and fall giving them away. All told, we’ve given away nearly 400 light sets this year to help keep people safe, and in compliance with the law. We plan to expand this in 2016 with more lights on the way. 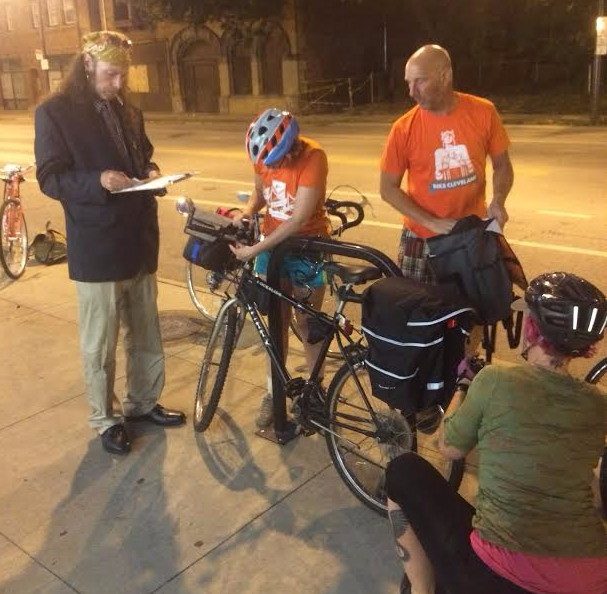 Cranksgiving
My new favorite event! In its 4th year we gathered roughly 60 volunteers on bikes and together raised nearly $2,000 worth of food for the Hunger Network of Greater Cleveland! Big thanks to Deaconess Krafft Center in Old Brooklyn for hosting us, and to everyone who donated their time and money helping to feed the hungry this holiday season.

City Council
Shouts to our friends in Cleveland City Council we worked with this year. Matt Zone, Joe Cimpermann, Tony Brancatelli, Zack Reed, Jeff Johnson. You’re all great partners and we thank you for being champions for bicycles in your wards! Kudos to Councilman Kazy for coming out and riding bikes with us; not everyone is willing to do that.

Federal Transportation Bill
Last March, we went to Washington D.C. as part of the Ohio Delegation to the National Bike Summit. The main item on the agenda was preserving federal funding for bikes and pedestrians in a new federal transportation bill. We met with staff from Senators Brown and Portman, as well as several House representatives, to express the critical need for preserving or growing funding. Good news! As a result of advocates like us all over the nation, the recently passed FAST Act not only keeps, but grows funding over the next five years! We’d like to see federal funding grow further, as it is still a relatively small sum of money, but considering many people expected funding to be cut entirely, we take this as a victory. 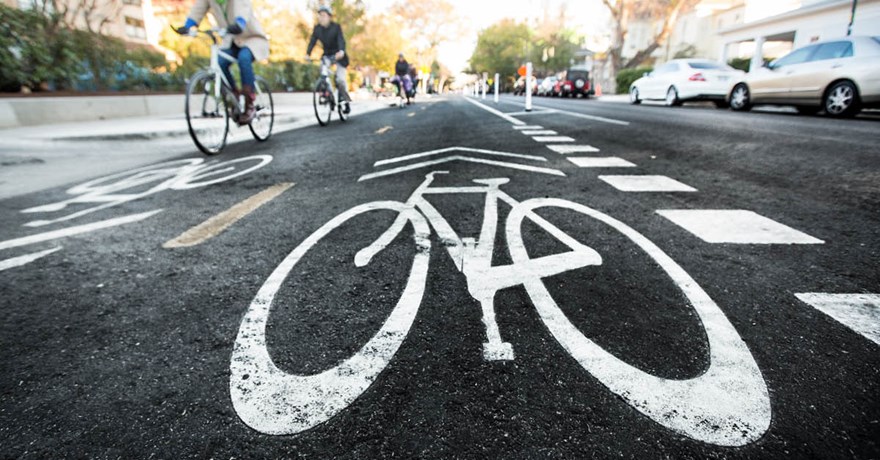 Chapter Organizations
We are really pleased to have Bike Lakewood as the first chapter of Bike Cleveland! If you live in Lakewood, a portion of your membership dues to go funding initiatives in your zip code through Bike Lakewood’s work. Our goal is to develop this program in 2016, and extend our reach by working with other advocacy organizations in the region. We’re all riding somewhere in NE Ohio, let’s make that place good for bikes, too.

Bike to Work Day
Did you bike to work this year? If you work downtown, did you make it to any of our BTWD events at the Cleveland Bike Rack? The last Friday of every month from May to October we celebrated Bike to Work Day by supplying coffee and breakfast to commuters who dropped by. The hope is that people will try it out, realize how easy and fun it is, and integrate some bike commuting into their everyday lives. Happier, healthier workers; less congestion on the roads; dollars saved by riders and non-riders alike; getting people to bike to work is one of our goals. What would motivate you to give it a try? Let us know! 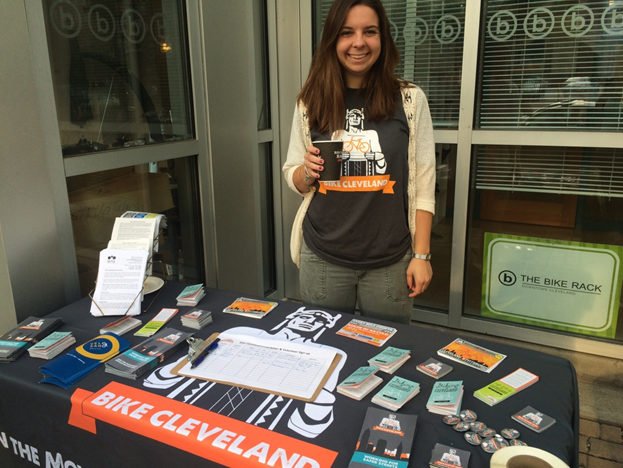 City Hall
In our short history we’ve had a pretty good relationship with City Hall, and we’re proud to have worked with them on many projects over the last nearly 4 years. However, we do disagree on occasion, we’re advocates after all! We were unhappy with the way City Traffic Engineering striped W.25th and spoke up about it. While we still don’t feel the current layout best accommodates the needs of a growing cycling community, we’re looking forward to working with the city to design on-street bike facilities that improve safety, and encourage more people to get out and ride bikes.
Our disagreement over 25th overshadowed another project that went down really well. When it came time to stripe West 14th Street in Tremont, Traffic Engineering striped it exactly the way we wanted to see it done and we want to acknowledge that. Thanks! 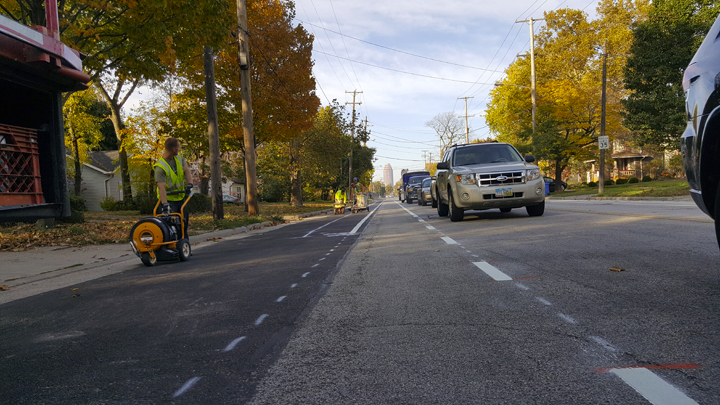 Lorain Ave Protected Bike Lane
The Cleveland Planning Commission approved conceptual plans for Cleveland’s first fully protected bike lane! Running from the Westside Market all the way to 65th Street, the project was spearheaded by Ohio City Inc. and Detroit Shoreway CDO; with input from us, and backing from City Council Members Zone and Cimpermann. Now comes to push to secure funding and make sure the plan is fully implemented. 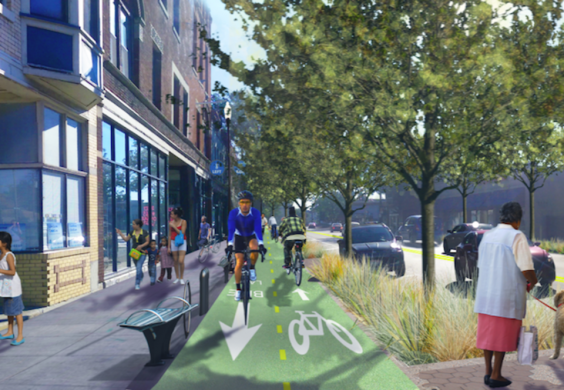 Law Enforcement Training
Laws, there are a lot of them, and sometimes even cops need a little help. Like it or not, most police get a lot more training and practice dealing with cars, not bikes. With the help of WE BIKE, etc., we trained over 60 law enforcement officers in 2015 to learn, and better understand the laws as they pertain to people on bikes. Going into the 3rd year of the program, we aim to grow that number to over 100 in 2016! 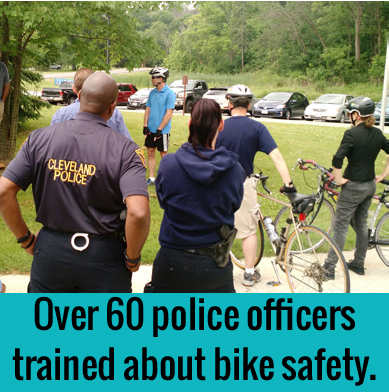 Brecksville Crash
2015 wasn’t all good news… last year again saw too many crashes and fatalities for people on bikes. Most notably was the crash in Brecksville that claimed the lives of Matt Billings and Jim Lambert when a person driving a truck failed to yield while turning left. It was another shocking reminder of how vulnerable people on bikes are, and highlighted the need for our continued work to make our streets safer, and educate motorists, law enforcement, and the general public. If you would like to make a donation to the families of Matt Billings or Jim Lambert, click their names to navigate through to their GoFundMe campaigns. Saturday is the Resolution Run 5k with all proceeds going to Matt Billings’ family. Go and run, or walk…. just go. 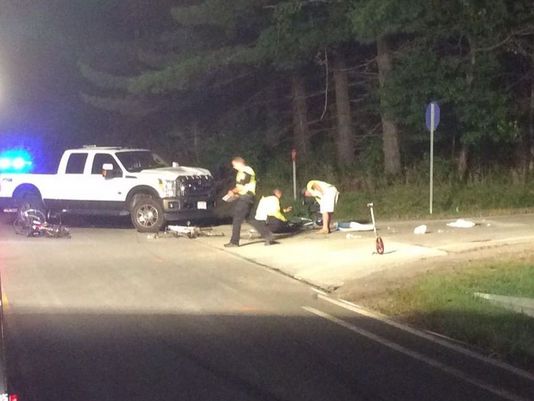 Public Meetings
We should probably track all of the public meetings we go to and implement a punch card system or something, because we go to a lot! Rocky River Drive, Lorain Ave, Lakeshore Blvd, Pearl Rd, block club meetings, and more. We’re out there all the time, speaking up for your right as a cyclist and making sure our streets reflect all road users; not just cars. Keep your eyes out when we post notifications about upcoming meetings. The more people who attend, the more likely we are to affect change.

New Offices
We moved! We are stoked to now be located inside The Lofts at the Westside Community House. You can find us downstairs from the Phoenix Coffee in Suite #3. We love being at street level where people can find us, and the office space is sweet! Plus? Free tenant bike share! Corner of 30th and Bridge in Ohio City if you weren’t sure. Come say hey! We’re typically there during normal office hours. We even got a microwave!

New Staff
Bike Cleveland got a little bigger this year. Rob Thompson joined the organization as Communications and Membership Manager, while Uche Adigwe replaced Marvin Ranaldson as our Outreach and Volunteer Coordinator. We had an awesome intern, too, in Mary Ellen Riley. We miss her, and Uche misses her Pandora playlists.

Fundo
The weather was SO BAD for NEOCycle this year, but we still managed to get 700 riders for our Sunday Fundo. 2015 marked the first year with title sponsor MCPc, and we’re pleased to announce that they are back on board for 2016. Expect a few tweaks to the ride for the next edition; Cleveland has a lot to offer, and we’re going to show it to you. Competitive much? Stay tuned, we have something for you, too! 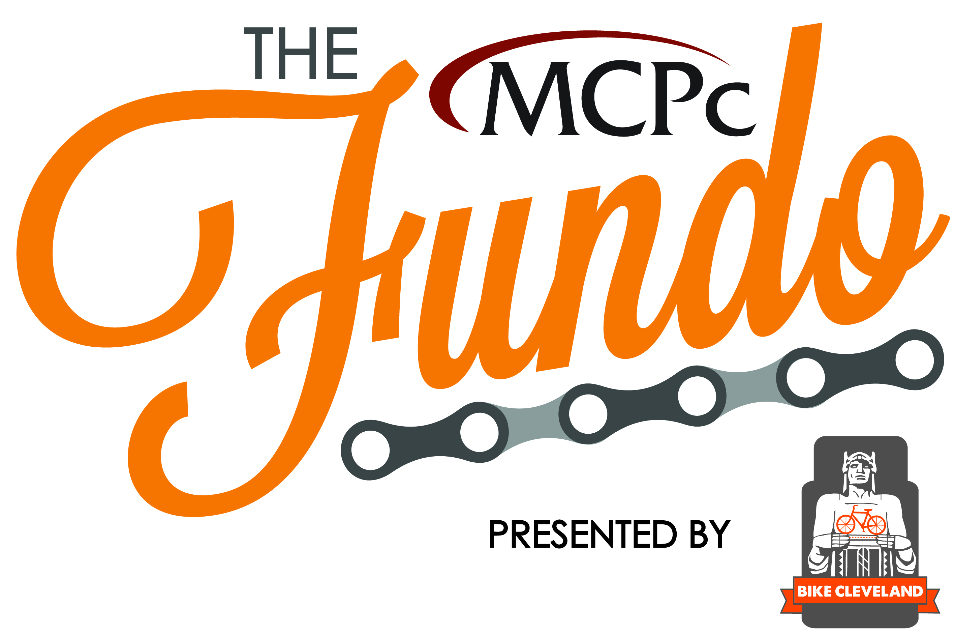 National Bike Challenge – Rust Cup
Cleveland put up 806,687 miles to Pittsburgh’s 585,534 to defend our title in the Rust Belt Battle of the Bikes! Logging 1,389,622 miles combined, it was calculated that together we offset 362,130 pounds of carbon dioxide, burned over 74 MILLION calories, and saved $227,000 for our communities at large. Nationally, the challenge logged over 37 million miles, offset over 8 million pounds of carbon dioxide from being pumped into the air we breathe, and saved us nearly $5 million. A great demonstration of the positive spillover effects of bikes on our society. Chapeau to those who logged their miles. You’re awesome!

On To 2016!
We’re really looking forward to 2016, and we’re wasting no time! First Monday back is the first round of training for primary school teachers so they can teach bike safety and skills to second graders in CMSD schools. This is part of our work with Cleveland’s Safe Routes to School initiative. Placement of bike share will undoubtedly keep us busy, as well as expansion of our business programs, and our work improving bike parking in the region.

For those of you who are members or who have donated in the past. Thank you! There is still time to donate to our Annual Appeal, and if you’re not, or you have lapsed, we really hope you’ll Become a Member; because without your support, we can’t do the things on the list above.

p.s. – Make sure you come to our Annual Meeting on January 24th! Click Here For Tickets!