Membership Perk: Half off Tune Ups and Bike Rentals 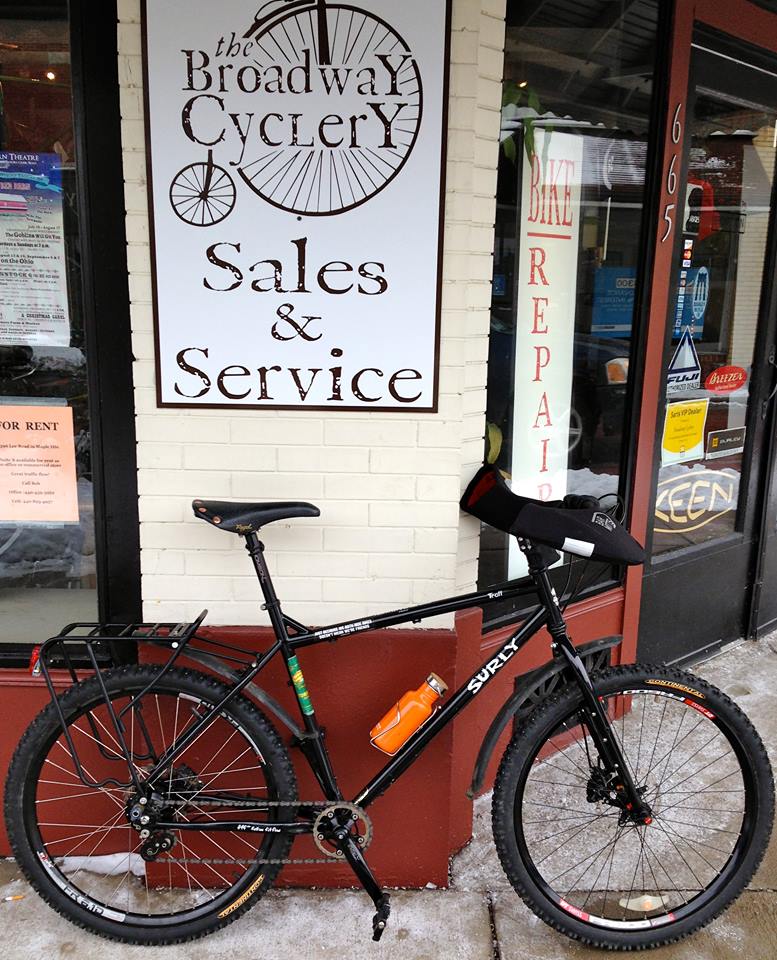 Broadway Cyclery, the first bike shop to sign up to be a Bike Cleveland partner upon the organizations conception in 2011, will be celebrating their 5 year anniversary this month. Broadway Cyclery is a must visit for any cyclist who wants to ride every day. In addition to the staple products you would hope to find at any neighborhood bike shop, Mike and Laura Hulett have a unique inventory of cargo bikes, trailers, studded tires and all weather clothing to help make bicycling a practical form of transportation for more trips, all year round. Some of their feature bike brands include Brompton, Surly, Civia, Xtracycle, and Cetma Cargo.
Broadway Cyclery is located in a historic former drug store on Broadway Road in downtown Bedford. Mik e and Laura own the property and lease a section out to the dance studio next door. It is minutes from the Cleveland Metroparks Bedford Reservation where you can find the brand new Bedford mountain bike trail and connect to the Towpath.

Cycling has long been a passion for Mike and Laura. Laura grew up on the East coast and had a father who instilled in her from a young age that a bicycle was first and foremost a vehicle. Mike had worked in a bike shop while in law school in Spokane, Washington and it is clear that he has a great love for the machines that bicycles are. He recalls walking out of his front door with his mountain bike in Washington and being able to ride for eight hours without being on the same trail twice. They both enjoy riding as often as they can. Before Broadway Cyclery opened up shop 5 years ago Mike was an attorney and Laura a geologist. While they both still keep their licenses for their previous professions valid, it is clear when you meet them at their shop that they are exactly where they belong.

I visited Broadway Cyclery and sat down to ask Mike and Laura some questions about their shop and their relationship with cycling. 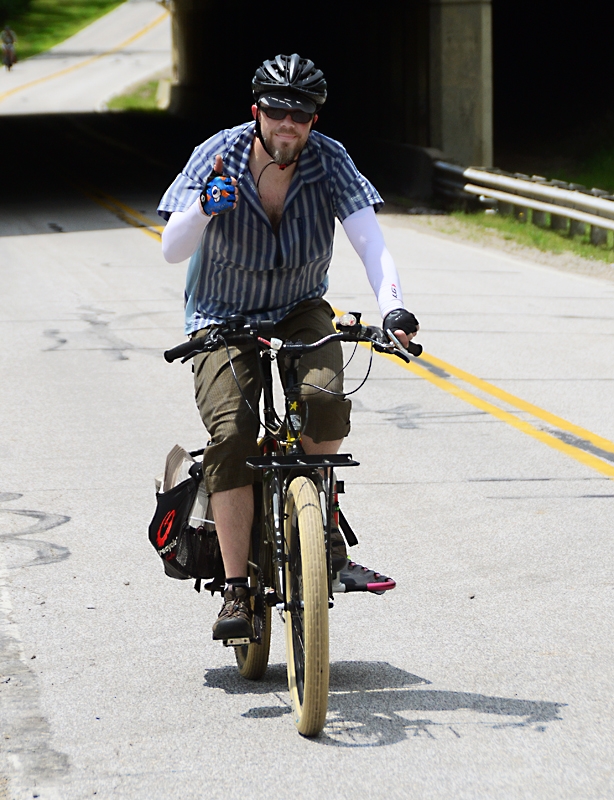 What made this location appeal to you?

Mike: “I think Bedford is one of the more under-appreciated communities and it has a lot of potential. It is one of the few areas that has a downtown… We are literally on the edge of the Metroparks, the Towpath… I think location wise it’s one of the best access points to a lot of the great riding in the area, both off road and on road.”

Laura: “And it’s easy to get to by the freeways as well.”
Mike: “I used to ride in the Metroparks on Hawthorn Parkway. I used to live out by Chagrin Falls. I’d ride past here all the time and I never knew this little downtown area was here. My brother told me about it and I kind of checked it out and was like, wow.”

What do you do to connect you to the community in this area?

Mike: “We try to be involved as much as possible. We work with city hall and the city of Bedford in terms of trying to promote bike trails and that sort of thing. We work with the Cleveland Metroparks. We are actually the bike rental coordinator for the Metroparks.”

Why do you choose to Support Bike Cleveland?

Mike: “We were Bike Cleveland’s first corporate sponsor. It’s a terrific resource. It’s a great way for people to connect to cycling and we’re excited about being a part of that. We’re thrilled to have a connection with you guys.”

Laura: “And it just seemed like a no brainer. Bike Cleveland, from the very beginning, everything that they wanted to do, (everything) they were trying to promote was right in line with what we want to do as part of the bicycling community. I remember going to the (Cleveland Bike Summit) way back several years ago and talking      to different people there and talking to Jacob and looking at what the vision was for the city. We just wanted to be a part of it.”

Mike: “Bike Cleveland has the resources to devote to promoting cycling and that sort of thing. That’s something that obviously we are passionate about but we don’t always have the time or the energy or resources to do it. So I think it’s a great fit.”

You mentioned earlier that you opened the shop to be close to the trails. You probably enjoy riding in those areas. What are some of your favorite memories riding around here or else ware?

Mike: “I don’t know about favorite memory but the mountain bike trail just opened in June. That was sort of the one thing we were missing. That’s been huge. As far as memories every ride is unique so every ride has a cool memory.”

Laura: “We are really fortunate because we live in a great area for cycling and more than anything we, as bike shop owners, looked at the maps. Looked at what’s all around us. People don’t realize that you can hop on your bike, which we did, and ride to Akron, stay at a bed and breakfast, and then ride back the next day. There are so many untapped things that you can do with cycling and as memories go that was one of the coolest things I think I’ve ever done. It was beautiful. It was a great ride.” 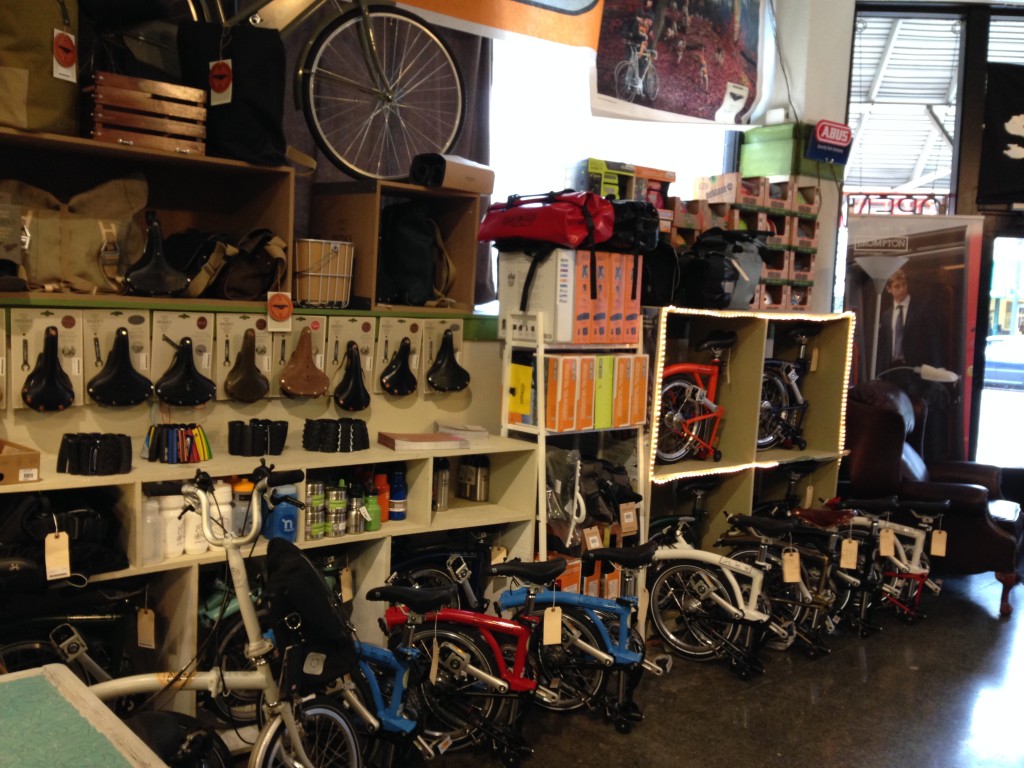 What’s your vision for the future of cycling in Cleveland?

Laura: “ An emphasis on taking the ‘old guard’ sour disposition about cyclist on the road and turning them around a little bit, and finding ways for them to see that cyclists aren’t abusing their roads. They are for everybody and it would be best if everybody was safe.” 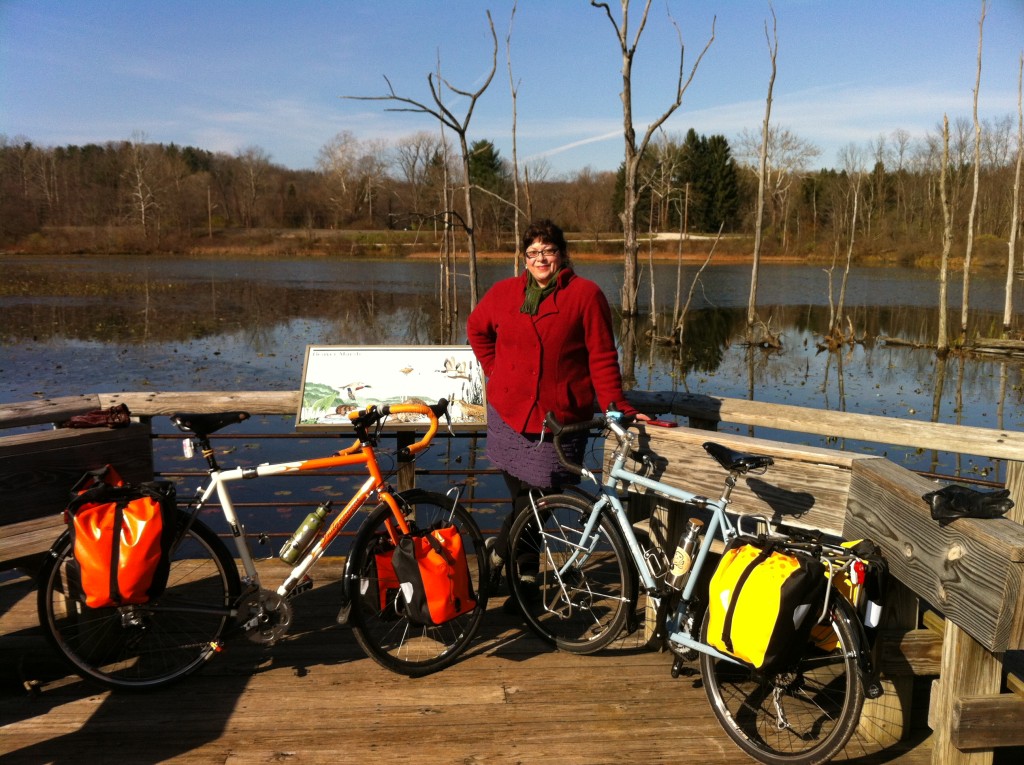 Why did you decide to specialize in cargo bike? Why are you passionate about these products?

Mike: “It comes back to the practical aspect of cycling. As a person with a dog, you can be as dedicated a rider as there is but if you have to haul a bunch of stuff, you have to carry your dog; you’re not going to do it unless you have a cargo bike. We have a lot of touring bikes, and we’re big fans, and you can certainly get a lot of stuff on them. In terms of hauling big, bulky, heavy, oddly shaped items you need a cargo bike. Zooey rides on the side of our Big Dummy all the time.”

Mike: “…or your Extracycle, exactly. It’s being able to bring bicycling into your life. Every time you go to the grocery store you don’t have to get in the car. If you want to go somewhere and have to bring the dog, if you don’t have a cargo bike it’s not going to happen. 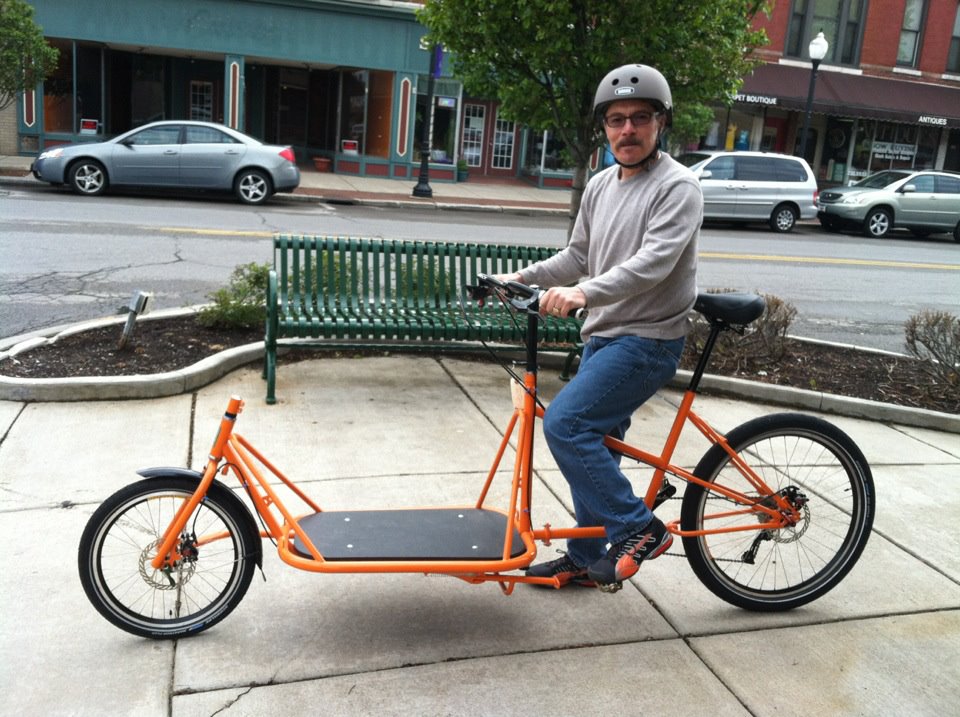 Laura: “We have noticed that a lot of people like them. Women in particular like them. They like the idea of being able to go grocery shopping. Obviously it’s not for everybody. There are some women who aren’t going anywhere without their fur coat…”
Mike: “…but they’re not our customers.”

Laura: “(Laughs)…but they’re not our customers. Women really are a big part of the bicycling community, a big part of who’s going out and buying bikes. A lot of women like a practical way to get around, particularly in cities, without having to have a car. Without feeling like they are stuck anywhere. You can get on a bike at any time, do what you need to do, and with a cargo bike that makes it all the more accessible. We’ve far and away sold more cargo bikes to women than men… You can do as much as your imagination can let you do with a cargo bike. 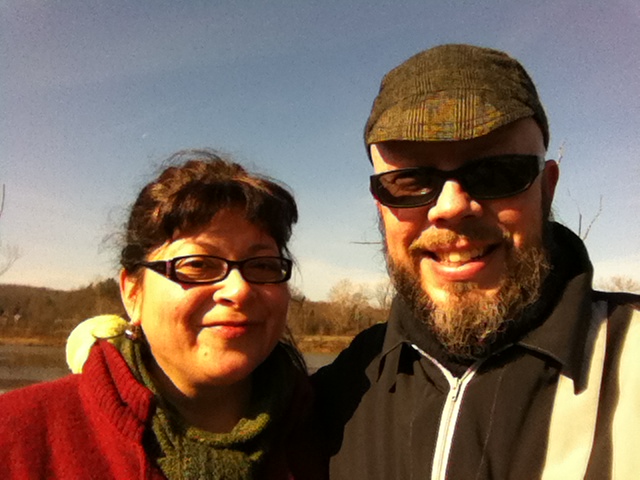 Broadway Cyclery will be holding a Social on Friday February 20th from 6pm-8pm to celebrate their 5 year anniversary and promote Bike Cleveland membership. Guests who join Bike Cleveland or renew their membership will receive a water bottle and patch kit with any $25 purchase. Anyone who joins or renews between now and the end of the social will be entered in a drawing to win a gift basket from Broadway Cyclery and Bike Cleveland. In the meantime please check out the shop if you have the chance. They are currently running specials on some seasonal clothing as well as some wonderful bikes that need to be moved to make room for new inventory.

Visit them on the web at http://www.thebroadwaycyclery.com.

A full list of membership perks offered by Bike Cleveland Supporting Businesses can be found at http://bikecleveland.memberlodge.org/benefits.