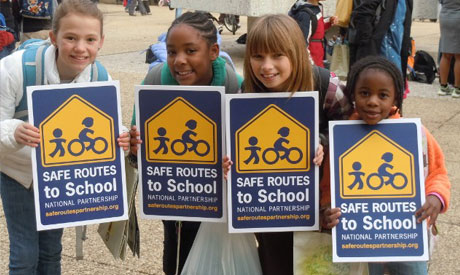 Few things excite us at Bike Cleveland more than improving facilities and safety for kids. So, we are pleased to be part of a committee working with the Cleveland Metropolitan School District (CMSD) to help them develop a comprehensive Safe Routes to School (SRTS) travel plan. The committee is made up of individuals representing agencies such as Cleveland City Planning, ODOT, the YMCA, local police, hospitals, and many others who bring valuable insight and expertise that will enable the CMSD to create a plan to help students from kindergarten through 8th grade make it to school safely.

The need for such a program is real. Between 2010 and 2012 there were 401 crashes involving kids on bikes, and 505 involving pedestrians resulting in over 761 injuries and 19 deaths. This is unacceptable and avoidable. Beyond the obvious need to improve the immediate safety for our children, safe routes to school programs are designed to improve the long term health outcomes of children by integrating physical activity like walking and riding into everyday movements. SRTS programs are already in 78 of 88 Ohio counties, and ODOT have committed significant capital that Cleveland will be able to leverage.

Still in the early stages, but with an aggressive schedule, CMSD have already begun gathering data and feedback from parents and other community members with a goal of presenting a final plan by summer 2016. Bike Cleveland will be hosting bike audits of roads and neighborhoods, and working with city planners and officials to improve conditions along “priority corridors” that benefit as many children as possible. When we talk of working for safer streets, this is exactly the kind of thing we are talking about.

Learn more at CMSD News Bureau, and follow us for updates as we continue to develop the plan.

« Editorial: Get With It Already! Bikes Are Good For Everyone; Not Just Cyclists! Random Acts of Brightness »