There has been a lot of news about all of the long-awaited bikeway connections becoming a reality over the next 3 years. Some are on-street improvements, others are altogether new routes, and one is a key bridge connection over a wide swath of land occupied by railway lines. Let’s zoom in on 3 of them, and get acquainted with exactly where this is happening – and what they are expected to look like.

This is the map that has been circulating for a few months now. It’s awesome, but because it’s such a bird’s eye view – it leads to questions about how exactly you will interact with these connections at ground level. 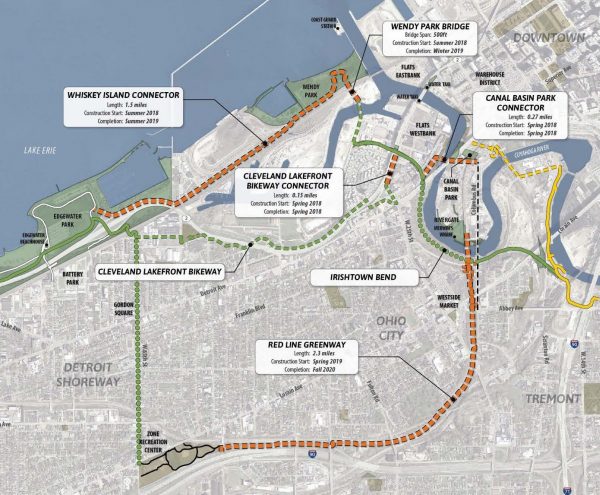 Let’s look at that 1.5 mile Whiskey Island Connector first. Now, for anyone that’s been down there for events and such, you know it’s tight quarters along Whiskey Island Drive on either side. But there are parks on either end that are super assets, and getting a connector between them will take some creativity. The design work is still in process, but in the image below you can see how the route will be added on the embankment between the road and railway in this area:

Next up, you will be able to use the Wendy Park Bridge to cross between Wendy Park and the Cleveland Foundation Centennial Lake Link Trail on the other side. This will create an optimum way to get between these 2 assets, and will radically alter how riders and pedestrians access this area – access that currently requires a rather long out-and-back to accomplish.  The south end of the bridge will land where shown below, and the Cleveland Foundation Centennial Lake Link Trail is just 2 blocks away.

The Red Line Greenway gets people excited for a lot of good reasons! It will sit at the intersection of several current trail and on-road assets – and if future plans hold, it will be at the southern gateway into the proposed rebirth of Irishtown Bend. But riders often look up at the massive white railway arches and wonder…how will we get up there? Good question. Here’s the answer. Plans are to have you enter the greenway off of Franklin, and then snake under the bridge as you work your way up the grade to trail level. This won’t be the only access point, but it will likely be the most often used based on it’s location in relation to other connections. Zooming in on the map shows a rough path that already leads up there. 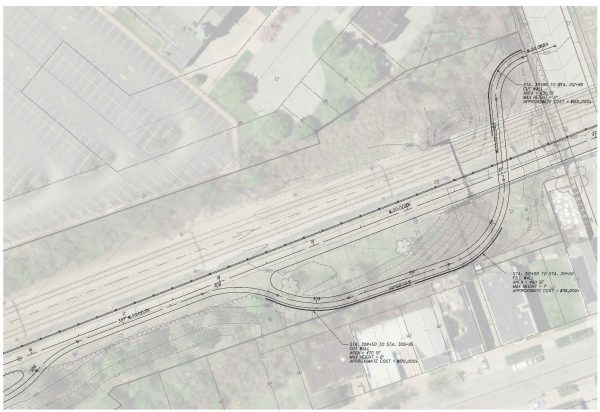 We would like to thank the Cleveland Metroparks for use of the images above, as they are part of a larger presentation they do on TIGER grant related projects in the region. And, of course, these are big projects – so details and timelines change due to a wide variety of factors. Stay tuned for updates and public meetings related to these and other upcoming projects – – and of course – – you can always get more involved by becoming a Bike Cleveland member and be part of the movement for better bike facilities in Cleveland!