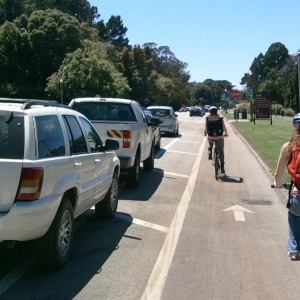 After a huge turnout last night at the community meeting it became clear that the residents are adamantly against the proposed plan to widen Pearl Road rather than adopt the community approved 2009 Transportation for Livable Communities Initiative (TLCI) Plan. The 2009 TLCI  would make this section of Pearl Road much friendlier to residents and local businesses. Old Brooklyn have been paying attention to the revitalization of other nodes within the city like Tremont, Ohio City, and Gordon Square, and residents recognize that being pedestrian and bike friendly is one of the keys to making Old Brooklyn the next great destination to visit, shop, open a business, and live. Comparisons to these thriving neighborhoods were voiced several times during the meeting. They do not want their neighborhood to merely be a corridor for commuters to speed through on their way to destinations elsewhere. 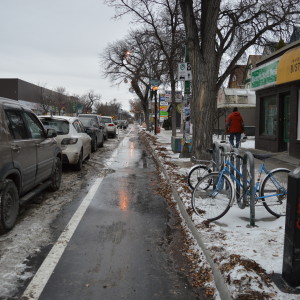 The community were clear in their demands – they want the city to study a narrower configuration that will calm traffic, make Pearl Road more bicycle and pedestrian friendly, and serve the people who live and work in the community. Striping unprotected, unbuffered bike lanes alongside what would amount to a quasi-freeway, removing parking on one side of the street, and narrowing sidewalks simply does not cut it in their eyes and they demand better.

Old Brooklyn appreciate the investment ODOT and the City of Cleveland are making in the neighborhood, but this is a project that will impact the shape of the neighborhood for generations to come, and residents want to make sure that such a long lasting investment is one that serves the neighborhood now, and far into the future. Thank you to the City for hosting the community meeting, and while it may have been a tough crowd, we at Bike Cleveland applaud their willingness to take feedback. If you wish to add your voice to the 150 or more residents in attendance last night, please sign the petition below.

We will collect signatures and send them the following people who are key decision makers on the project. These decision makers include: Director Matthew Spronz, Director of Capital Projects at the City of Cleveland -and- Cleveland City Consulting Engineer, Martin Reese.

Read or edit the petition

The year? 2015. After decades of progress, traffic analysis, and engineering, cities across the country and the world have finally come around to the idea that wider roads and more lane miles are not the answer to our transportation needs. Road diets that shrink quasi-freeways into usable, multi-modal corridors are the norm. Buffered and protected bike lanes are cropping up all over the place. Pedestrians, transit users, and cyclists are considered along with cars when drawing up configurations in the public right of way. Helping people move around within a neighborhood is paramount to speeding people through it with peak traffic flows; at least most of the time.

Here is a rendering from a 2009 TLCI plan for a redesign of West 25th/Pearl Road through the Old Brooklyn neighborhood. Adequate travel lanes, on street parking, center turn lanes for safety and ease of use, and yes…protected, buffered bike lanes. This plan is fully supported by the local community, Old Brooklyn CDC, and Bike Cleveland –

Sadly, a traffic study for this plan was never done. Instead, the City Of Cleveland decided to study a make believe configuration seen below. One that will actually WIDEN the roadway by 3 feet –

Welcome to 1966, where we widen already massively wide roads to make room for more dedicated travel lanes at the expense of safety, pedestrian space, and the local community’s wishes. “But there are bike lanes on this” you might say. Sure, there are bike lanes and we like dedicated infrastructure as much as anyone, but in this instance it doesn’t improve safety because making a road this wide, with this many travel lanes will create a quasi-freeway with people exceeding the speed limit and placing cyclists very close to fast moving traffic. It feels unsafe because it is.

Had the city conducted a traffic study on the preferred traffic configuration from 2009 and found it not to work that would be one thing, but they didn’t. They completely disregarded the wishes of the local community and have made a decision unpopular with the people who will be affected the most. The City needs to do its due diligence and find out if the community desired configuration will work before spending millions of dollars to widen the right of way which will do nothing but serve the interests of suburban commuters who want to speed through the neighborhood en route to a destination elsewhere.

There is a public meeting tomorrow night, Wednesday, May 20th, at 6:30pm @ 4423 Pearl Rd, Cleveland, OH 44109 – Come out and voice your opinion on the proposed plan. We’ll be there along with Old Brooklyn Community Development Corporation and would love to hear what you think about spending millions of dollars widening a stretch of road that is already among the widest sections of Pearl road, and prioritizing suburban car traffic over all other users.