News 5 Cleveland reported about the planned changes to Fulton Road, and the potential impact it could have on the safety of the road. Councilman Kerry McCormack as well as residents are concerned about the removal of 3 street lights for good reason. Please read our first update below, and sign on to our letter recommending changes to the design of the street. 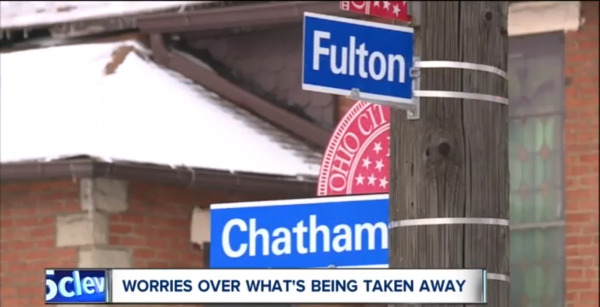 On January 23rd, the City of Cleveland held the final Public Meeting for Phase 1 of the reconstruction of Fulton Road. We were pleased to see the improvements in the continuity of the bike lanes from Clark Ave. to Monroe Ave. – as the original plan toggled back and forth between bike lanes and sharrows.

However, there is still room for improvement with the current design. In particular:

Join us in expressing the need for these changes by signing on to the letter below. We will share the signed letters with local council members and city leadership in order to make Fulton Road safe for all users.

It’s time to provide final feedback on the first phase of the reconstruction of Fulton Road. This phase will reconstruct Fulton Road from Clark Avenue north to Lorain Avenue, and work is due to start as soon as February. This meeting is hosted by the City of Cleveland, Ward 3 Councilman Kerry McCormack, Ward 14 Councilwoman Jasmin Santana, Metro West Community Development Organization, and Ohio City Incorporated.

We need a Fulton Road that is safe and connects to the growing bike network in Cleveland. This corridor connects to the Lakefront Bikeway and to the future Lorain Avenue protected bike lane. Parallel streets W. 41st and 44th have unprotected bike lanes the are notoriously dangerous to ride in due to motorists driving in them. This is our chance to connect the Stockyards Neighborhood to the lakefront.

We haven’t seen the updated design for Fulton Road (the design shared at the last meeting had a mix of unconnected bike lanes and sharrows, creating an unsafe place for people to bike on this 35mph street.) Join us at the Fulton Road phase 1 public meeting on January 23rd and let’s see if the plan is to make Fulton Road a safe, connected street for people who bike. 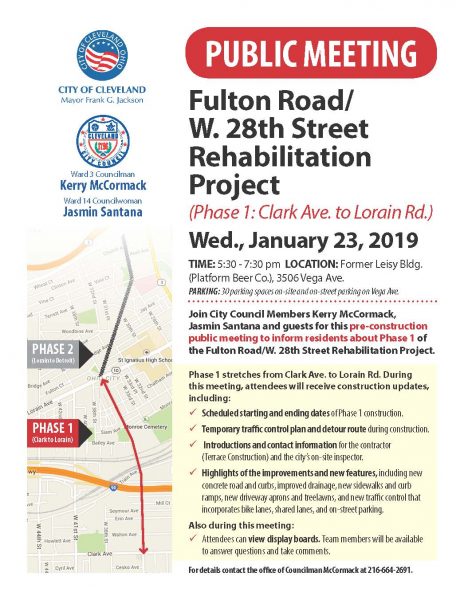 If you’re interested OCI is organizing a group walk to the meeting. Meet in front of Planet Fitness (3333 Lorain Avenue) at 5:15pm. They will walk back to Ohio City as a group following the meeting.

Note: There will be a second public meeting for the 2nd phase of the project from Lorain Ave to Detroit Ave. Stay tuned for more information on this section.