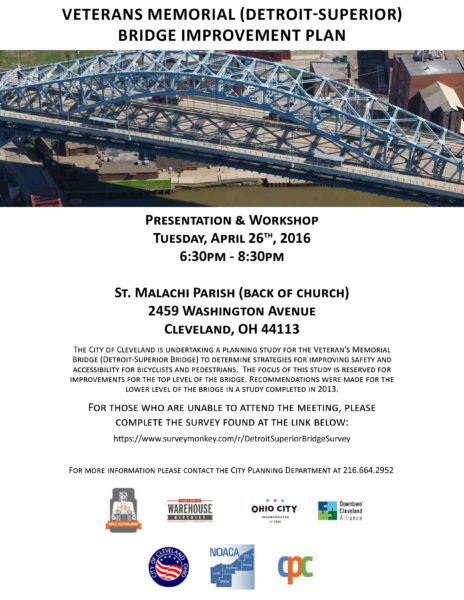 Riding east across the Detroit-Superior Bridge is not always an easy proposition. The bike lanes on Detroit Ave end at West 25th Street and the speed limit jumps from 25mph to 35mph. Worse, because the bridge is a large structure with wide lanes and clear sight lines, people tend to go much faster than the posted speed limit. The end result is an unsafe situation on one of Cleveland’s primary east/west bicycle routes. The good news is that NOACA and the City of Cleveland are addressing this situation. One proposal is to close the southern (eastbound) lane to cars and trucks and create a dedicated bicycle / pedestrian facility in addition to reconfiguring the intersections at both ends of the bridge.

If you can we encourage you to attend and voice your support for plans that would dramatically improve one of the most critical connections in the city. You can also share your thoughts by filling out NOACA’s survey. 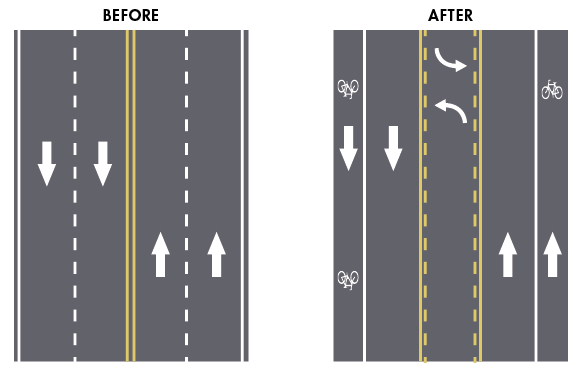 Lakeshore Boulevard is currently configured for traffic volumes that simply do not exist. This excess capacity promotes speeding at the cost of safety, neighborhood connectivity, pedestrian utility, retail performance, and multimodal usage. The City of Cleveland has proposed a “road diet” that will calm traffic and reduce crashes without impeding the flow of cars. Such configurations have been in use for over three decades, and are endorsed by the U.S. DOT as an effective means of improving the safety and livability of our neighborhoods.

Councilman Polensek is skeptical of the proposed new configuration and is hosting a public meeting to discuss the issue –
Where: Collinwood Recreation Center (16300 Lakeshore Blvd, Cleveland)
When: Thursday, April 28th, 6:00pm.

Lakeshore is part of the Lakefront Bikeway, 2014 Master Bikeway Implementation Plan, 2007 Master Bikeway Plan, and the new Eastside Greenway plan. If you live in the area around Lakeshore, or travel on it, you should attend and voice your support for calmer traffic and better bike facilities. 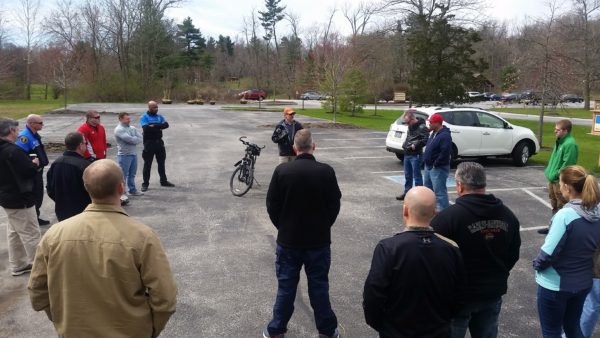 Last week we conducted another round of our Law Enforcement Training for area police officers. A 2-day seminar with both classroom and hands on work, it is designed to help educate officers on the law as they pertain to people on bikes, and to learn to address common issues to improve safety and reduce conflicts. We are pleased to report it went very well with 35 officers attending from 19 area departments. Here is the list of the departments who participated.

We sent information packets to every department in Cuyahoga County, and several in the larger NE Ohio area. Training is free, so if you don’t see your local PD listed, let them know you’d like them to attend next time we host a session. Info can be at bikecleveland.org/enforcement

Bike to the Ballpark 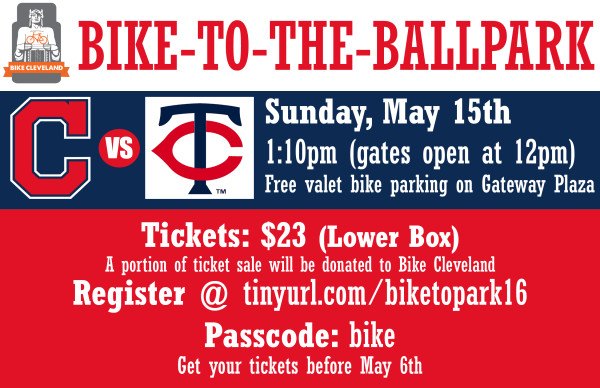 The boys of summer are here, and this year we’re teaming up with the Indians for Bike to the Ballpark!Ride your bike to the park and watch the Tribe beat the Twins! There will be free valet bike parking on the Gateway Plaza, and a portion of tickets purchased using THIS LINK will go to Bike Cleveland!

Use passcode “bike” to get access. Deadline for tickets at May 6th!
Where: Progressive Field
When: Sunday, May 15th, 12pm (first pitch 1:10pm)
Tickets: HERE (tinyurl.com/biketopark16)