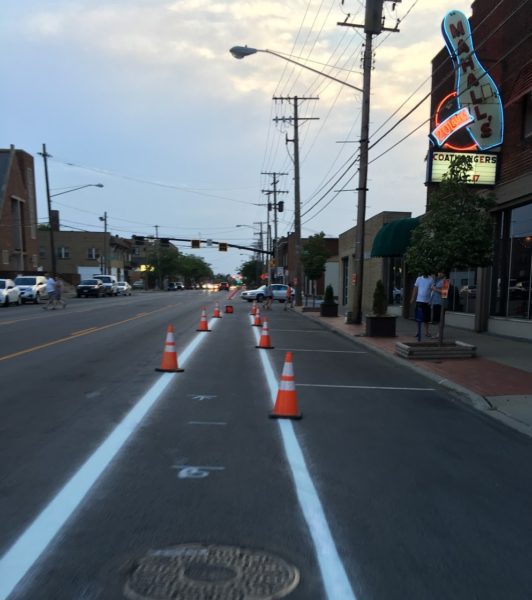 Striping is underway and should conclude next week.

After much anticipation, Bike Lakewood is excited to announce that Lakewood has begun striping the bike lanes on Madison Avenue! Markings for placement of the lanes were painted earlier this week and final lanes should be complete in a few days. This project has been a long time in the making and Bike Lakewood, Bike Cleveland and the City of Lakewood all worked hard to make it happen; if you signed the petition, thank you!

The new bike lanes will run for more than two miles, most of the length of Madison avenue, and will include two safety features that are a first for Northeast Ohio:

“Intersection Crossings” will be included at all signalized intersections. These are dotted markings that extend the bike lanes through intersections. These markings reinforce that through bicyclists have priority over turning vehicles or vehicles entering the roadway. They delineate the bicycle zone more clearly, and helps position cyclists as they pass through the intersection; a particularly useful feature for new cyclists who may be unsure where they should be. Lastly, they raise awareness for both bicyclists and motorists to potential conflict areas.

“Door Zone Markings” will also be included, which are small, diagonal marks striped inside the bike lane that alert bicycle riders of potential conflicts from motorists carelessly opening driver side doors into the path of people on bikes.

“These additional striping measures will help raise awareness of cyclists on our roadways, and more importantly, will create safer conditions for both cyclists and motorists on Madison,” said Bryce Sylvester, Senior City Planner for Lakewood.

Sylvester is committed to making Lakewood the most bicycle friendly city in the region, and hopes these kinds of innovations will help Lakewood gain national recognition as a city devoted to sustainable transportation option. As with any new facility there will be a learning curve for cyclists and motorists alike, and the city has created a one page description of how bike lanes work when you are riding a bike or driving a car.

Bike Lakewood would like to thank Sylvester and the entire City of Lakewood for following through on their pledge to make Madison Ave a better and safer corridor for all road users. We are pleased to have been part of this improvement, and we can’t wait to celebrate bigger and better bike projects in Lakewood in the future!

If you would like to see more and better infrastructure in Lakewood, you can support our efforts by becoming a member of Bike Lakewood as part of your Bike Cleveland membership. Bike Cleveland members who reside in 44107 automatically become members of Bike Lakewood, and half of your membership dues are reserved exclusively for use in Lakewood. Add your voice to ours and become a member today!