FROM COUCH “POTATER” TO 50 STATER by Murray Fishel, Illustrations by Stephen Haynes

A founding member of Bike Brecksville, Murray leads the Daytime Crawlers on wonderful, slow rides throughout the Cleveland area.  You’ll enjoy good company punctuated by good food at the halfway point.  Check them out on Facebook @daytimecrawlers!

In 1991 I was a professor of political science at Kent State University. In the previous 10 years I had become increasingly sedentary in my life. No major activities or exercise, only pacing across the front of the classroom. By this time I weighed about 250 pounds.

Then the University announced that it would offer a five-year buyout to faculty members who had a minimum of 25 years of service. After buying two years of service from other universities at which I’d taught, I had 27 years, making me eligible for the buyout. I suspected, however, the program would be so popular with more senior faculty that I would not be included in the buyout, at least for several years.

My suspicion proved wrong. I was selected in the first year. While I had a skill that would allow me to continue to earn money—namely political consulting—I began to panic because I had no real outside interests beyond politics. So, here I am: a 54-year-old professor faced with early retirement and nothing to do most of the time.

Everything I’d read warned against allowing that to happen. The caveat was, “Don’t retire unless you have a variety of outside interests.” And, I didn’t. This was one of many instances in which my Ph.D. was useless; it represented the jocular phrase “piled higher and deeper.”

As luck would have it, around this time, I happened to see an article in the Cleveland Plain Dealer on mountain biking. Intriguing. That night I woke up with the realization that I probably spent $300 a year on choco-late bars; I decided that I would take a chance and risk investing $300 on a mountain bike. Hopefully, I would like it. I definitely needed to find something healthy and physical and preferably outdoors. Otherwise, I’d fall into the trap of daily boredom and watch my weight and blood pressure continue to climb.

In May 1991, I went to the Wheel and Wrench Bike Shop in Kent and purchased my first bike as an adult—a Diamondback Sorrento moun-tain bike. Mark, the salesperson, persuaded me to also buy a helmet, tire levers and a spare tube. I did, even though I didn’t have a clue as to how to fix a flat.

I vowed to myself that I would never spend a lot on biking “stuff” and would NEVER EVER wear those funky looking spandex bike shorts!

Well, that was about a dozen bikes ago, and thousands of dollars spent on “stuff,” from SPD pedals and shoes, to inclinometers and computers; from spandex shorts to heart rate monitors. The list of stuff is just too long to list.

BIKING: A JOURNEY TO A BETTER PLACE

Shortly after buying my Diamondback, I ventured out for my first ride. I was scared, a bit embarrassed at 250 pounds and was hoping I wouldn’t see anyone I knew. I put on an old pair of jeans, Cleveland Indians tee shirt and my vintage converse All Star shoes. I also wore my new helmet. I was the living incarnation of the anti-biking persona.

I rode three miles on the Summit County (OH) Bike Hike Trail. I took a radio so I could listen to the Cleveland Browns. (Yes, another loss). I made every rookie mistake possible. I missed shifts, threw the chain on a hill and was unaware of bikes behind me. After the three miles, I thought my legs would fall off. The next morning I woke up sore with an aching butt and legs. It took me another few days before I was willing to try again. But I did. And that was about 113,000 miles ago. 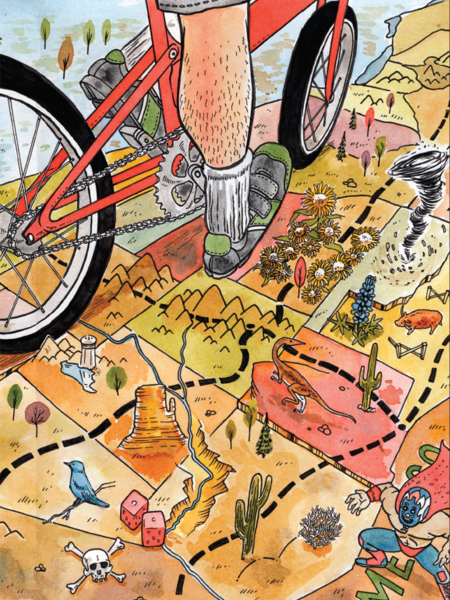 I never would have thought those bikes could take me to the places I’ve been. Not only geographically, but physically and spiritually as well. Well, they have.

• Geographically, I’ve now biked in all 50 states and six countries. (Highlight below right shows the states and countries, and the areas in which I cycled.)

• Physically, I survived a heart attack in 2008, at least partially be-cause I was pretty fit at the time. The fitness came from my biking. As of this writing my BP hovers in the normal range of 115-120 over 72-80. My resting heart rate is between 48-56.

• Spiritually, I’ve experienced emotional growth and a sense of calm. The bike has contributed to a new sense of balance and joy in my life. And I am certainly grateful for that. I can actually get out of my head and into the sights, sounds and smells of the immediate environment. Those bunnies, chipmunks and groundhogs bring smiles to me and remind me of the competition my late wife Judy and I had—who saw the critters first. Jude always won. And, she still does!

• The bike was the vehicle that led me to Jude. We met through a singles bike club in 1997 and were able to share the joy of cycling together in many states and several countries. We both loved the experiences of cycling around the Big Island of Hawaii and joining English friends on a ride from their home in Newcastle, England to Edinburgh, Scotland. We were also perfectly happy spinning along in Oregon, California, Arizona, Nevada, New Mexico, New York, Maine, Florida, West Virginia, Ohio and South Carolina as well. Our bikes were like a prescription for joy and serenity.

• The bike has become the framework for my social life. For the last 10-12 years I’ve led a small group every Sunday morning on rides in the Greater Cleveland area. We have a group of 5-15 regulars weekly. We have fun together. We ride together. We wait for each other. We even have parties together.

• The bike eventually provided the subject matter of my co-authored book with Stan Purdum, “Pedaling on the North Coast,” and articles about bike trips to Ireland and England. I have especially fond memories of the Ireland ride with Judy. We had decided to ride a route just north of the Ring of Kerry. We chose the route because there was a chocolate factory there. When we parked to begin the ride, it began to rain and continued for some time. After a couple of miles on the bikes I asked Jude if she wanted to stop and head back to the car to drive some-where to play tourist. Her response was, “Murray, what kind of question is that? There’s a chocolate factory on the route.” We continued, and the chocolate was delicious.

“I ASKED JUDE IF SHE WANTED TO STOP AND HEAD BACK. HER RESPONSE WAS, ‘MURRAY, WHAT KIND OF QUESTION IS THAT? THERE’S A CHOCOLATE FACTORY ON THE ROUTE.’ WE CONTINUED, AND THE CHOCOLATE WAS DELICIOUS.”

After I retired, I began to do political consulting around the country. I realized quickly that I needed some form of exercise or I’d go crazy. The consulting was high pressure work. Candidates and organizations expected me to be smart, creative and instantaneously give them answers to complicated questions. I always did the best I could, but by the end of most days I had a bad case of fried brain.

Sometime in the early to mid-1990s some biking friends bought Bike Fridays, bikes designed to allow riders to fold them, pack them and travel with them. Since they fit into standard, mid-size suit-cases, they traveled free on airlines. Pretty remarkable. I decided to spend the money and get a New World Tourist from Bike Friday.

Pretty soon I was taking the bike on consulting gigs in different states. Sometimes, I’d ride very early or very late in the day; other times I’d build an extra day or two onto the trip itself. I’ve used my Bike Friday to ride in 35 states. Since getting the Friday, I’ve ridden around 20,000 total miles on the folding bike.

The convergence of political consulting and the Bike Friday in my life was the initial stimulus for my biking adventures outside of Ohio. The versatility of the Friday is remarkable. Without it and the consulting I’d never be writing this essay. It was years later however—in 2007—that I actually put the goal of biking in all 50 states at the top of my bucket list. By that time I had pedaled in 40 states.

• Self-contained tour of both islands of New Zealand—1,800 miles

• C2C in England, from the Irish Sea to the North Sea (climbs and descents)

WORST DAYS ON THE BIKE