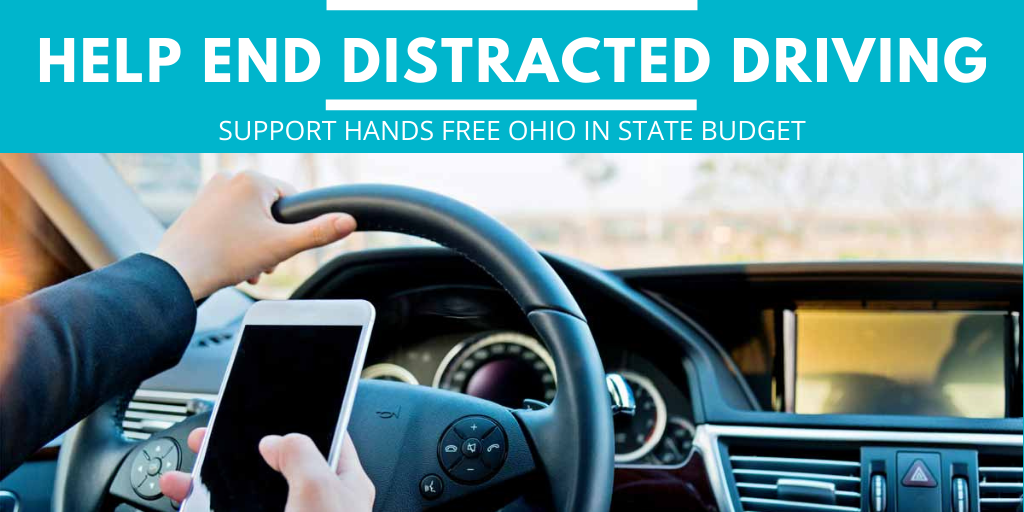 Ohio Governor Dewine announced on Feb. 8th, 2021 that he is reaffirming his commitment from over a year ago to improve the safety of Ohio’s roads by including Hands Free Ohio provisions in his state budget proposal.

Hands Free Ohio would make driving while handling any electronic wireless device a primary offense for adult drivers and will increase fines for drivers who habitually use devices while driving. In cases where a driver using a device causes serious injury or death, the penalties will mirror those of drunken driving. This bill is similar to HB285 which Bike Cleveland supported in May 2020. You can read our proponent testimony here.

Contact your state representative and the Governor urging them to support Hands Free Ohio’s provisions in the state budget proposal.

According to the National Highway Traffic Safety Administration 10% of fatal crashes and 15% of serious injury crashes in the US in 2015 were distraction related. That is 3,477 people killed and an estimated additional 391,000 injured in crashes involving distracted drivers. According to data from ODPS, 276 people died in crashes that were caused due to distracted driving and 2,755 were seriously injured in Ohio between 2015-2019.

While there is widespread understanding that distracted driving is bad (a recent AAA survey found that over 80% of people find texting or emailing while driving a serious threat to safety), many people still engage in those behaviors (the same survey found that over 40% of drivers had read an email or text within the last 30 days). Sharing the road is much harder when people are not looking at the road. Effective distracted driving laws and enforcement are key to discouraging this dangerous behavior.

A University of Alabama Study found that banning all handheld devices while driving works, reducing traffic deaths for adults ages 22 to 64. In total, distracted driving laws can reduce traffic deaths by 11%.

47 states plus Washington D.C. ban text messaging for all drivers. All but four states, including Ohio, have primary enforcement for driving while distracted. Locally, both Lakewood and Shaker Heights have already passed laws that make distracted driving a primary offense. It is time for the entire state of Ohio to follow suit and make distracted driving illegal, the lives of Ohioans on the roadway depend on it. We need you to contact your state legislator encouraging them to support the inclusion of Ohio’s Hand Free Ohio provisions in the state budget bill.