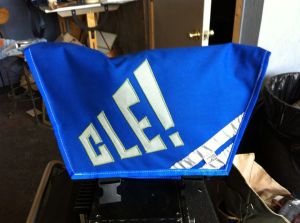 Michael’s studio, located in the Screw Factory building behind Madison Park in Lakewood, is a modest workspace bordered with an extensive variety of threads, fabrics, and sewing machines that his projects have caused him to collect over the years.  There is nothing modest about the quality of his work though.  If you are a Cleveland cyclist who doesn’t own one of his bags, it is very likely that you have at least seen one and admired it.

Back in 2007, inspired by custom courier bag makers such as R.E.Load and Seagull, Michael decided to make himself a bag.  With no previous experience producing textile goods, his first bag was unsatisfactory. His second effort was more successful and he began making bags by request for people he knew within the community. He perfected his craft and built his brand over the next two years by making bags to give away at Bike Polo matches and other cycling events. He credits Alex from Joy Machines Bike Shop and Travis and Jamie at Blazing Saddle Cycle for encouraging him to “pull the trigger” on incorporating his business in 2009.  These two new independent bike shops preparing to open on the near West side would become the first retailers to sell Forest City Portage bags. 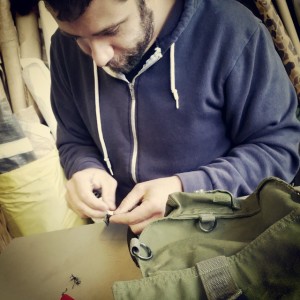 Forest City Portage bags are handmade, can be customized based on several designs that Michael has perfected over the years, and definitely have as much personality as an inanimate object can possibly have.  Today Michael runs his studio with two part time employees, although he admits that it is difficult for the artist in him to “relinquish any control… but it’s a good learning process.”  Forest City Portage currently produces between 15-35 bags a month.

Michael has been a supporter of Bike Cleveland since its birth at the Cleveland Bike Summit back in 2011.  Somewhere between building bags, distributing them to retailers, personally selling them at local markets, and managing his studio he was able to find some time to sit down and answer some questions about being a Cleveland cyclist and a business partner of Bike Cleveland.

What is the connection between your business and cycling? 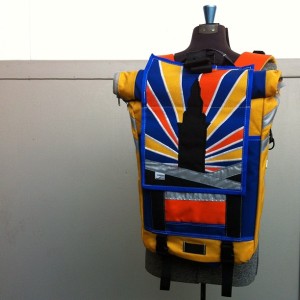 “The reason I choose courier bags as my creative outlet was having just given up my car, so I was living car free in Cleveland and I needed a new bag.  My Timbuk2 was wearing out on me and I said ‘heck I can do this, this will be a good manifestation of all these pent up artistic desires.’ So there is that direct one and then my father was hit by a car so I have a personal connection to cycling and cycling advocacy just through that.  That led me to get involved with the Access for All campaign and that’s where I met Jacob (VanSickle, Executive Director at Bike Cleveland,) and I was on the leadership team that helped create Bike Cleveland.”

What is your vision for the future of cycling in Cleveland? 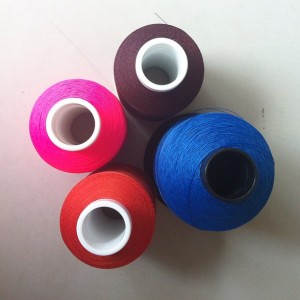 “I just want a place where people can use bikes with the least amount of impediment.  I have my personal opinions on the ways that that can be better but coming from nothing I’m just encouraged at the amount of projects that we’ve been able to get done so quickly since the creation of Bike Cleveland and I’m really excited about a lot of the projects that are in the works, but mostly (I just want a place) where there is no more excuses.  There’s not someone saying ‘if only there were this, if only there were that,’ and just a general awareness in the city that bikes belong and aren’t just an afterthought.  In a green world the city of Cleveland would be championing the cause but the fact that Jenita (McGowan, Chief of Sustainability-City of Cleveland,) and the Office of Sustainability have been working has been great.”

What kind of bike do you personally ride? 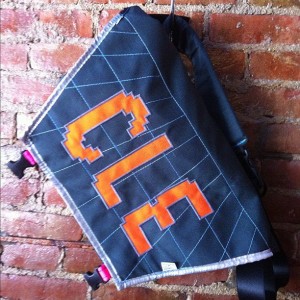 “It depends on the day.  I have a beautiful hand built Scapegoat Cycleworks frame that I don’t like getting on because it’s worth more than the rest of my life, but the bikes that I ride day to day are a lawn salvaged Trek Multitrack hybrid that I had tricked out with some modern components and a bike boom single speed conversion for just bumming around town.  Unfortunately I don’t get to do a lot of long rides anymore so most of my bike riding is just straight commuting.”

What is your favorite place to ride your bike?

ed riding bikes in Montreal.  Their bike share program is really great. I was there for a bachelor party with, like, 15 guys and tooling around a big city on bikes with a bunch of people is always fun.  I love riding in big cities. Manhattan is one of the funnest places to ride bikes.  Back when I was younger and dumber some polo kids and I toured the East coast on brakeless fixies, and riding through Manhattan no brakes is one of the most invigorating things you’ll ever do, but once is probably enough.  I’m getting old and achy.  In Cleveland I just love exploring neighborhoods on a bike, just riding to a place you’ve never been and getting lost on a random street and seeing what’s out there. There is so much history and architecture and cool nature stuff in this town.”

What is your favorite bicycling memory? 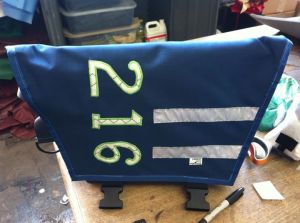 “I think it was when I was little a bunch of kids that grew up on the near West side and I were in this junior tennis league at Cudell Rec and we would all ride bikes with our tennis racquets on our back to tennis practice every day and it was that quintessential childhood moment where you got freedom from your parents to get places. The bicycle provided that for us. It was just always sweet to get on your bike and go places and do things without needing an adult to take me.”