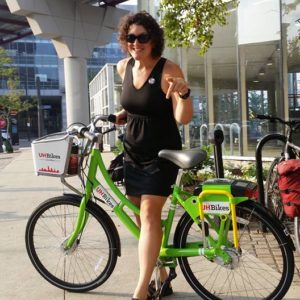 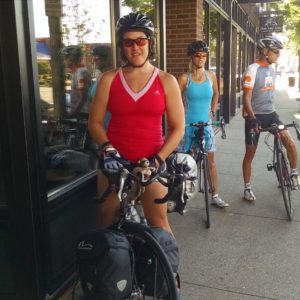 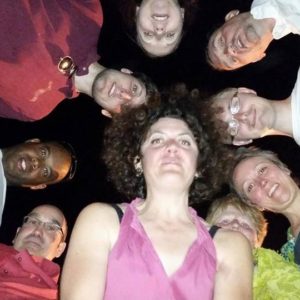 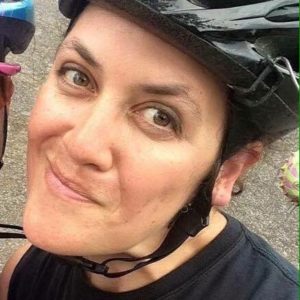 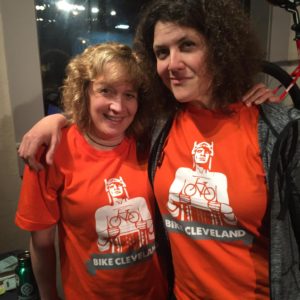 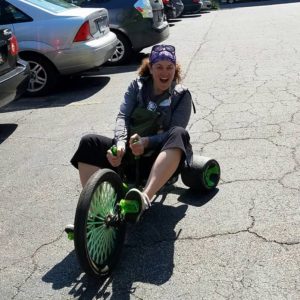 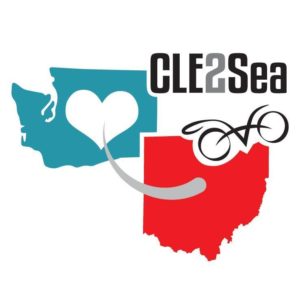 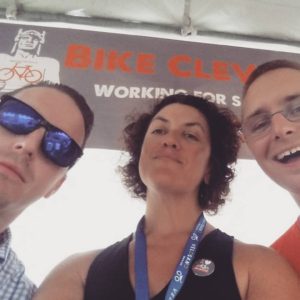 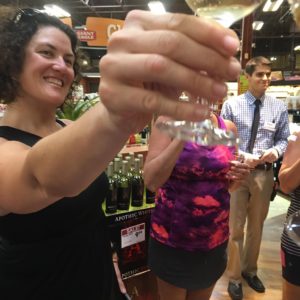 UPDATE: October 5th, 5:30pm:  From Shelli’s GoFundMe page – Lots of good news…Shelli is out of the medically induced coma and breathing on her own thru her tracheostomy. When awake she is moving her limbs on her right side

with some purpose, like scratching an inch and is tracking with her eyes. She is hearing our voices and sometimes follows simple commands like a thumbs up or a hand squeeze. She can deliver a mean stink eye at the doctors or nurses who are poking at her.

All of these small improvements are huge leaps for the severity of her brain injury. We are praying that improvements keep coming but we must be cognitive that she is still in a very precarious situation. She will be watched very carefully as severe complications can pop up even weeks after the crash.

We expect that Shelli will be moved out of CCU soon. Even after her move to another ward her visitation will be very limited as rest and quiet is very important brain healing time. For the initial period she will continue to have a tight circle of caregivers but her circle will grow steadily as she continues to improve.

Please continue to send up those prayers and positive vibes so that each day going forward is full of GOOD NEWS!

For those of you who want to donate to Shelli’s ever mounting medical and recovery expenses the Go-Fund-Me campaign is available online or you can donate by personal check thru a Trust Fund that has been established for Shelli. By donating directly to the Trust Fund your donation is not subject to the admin fee charged to the family for the online donations collected. Your continued heartfelt emotional and monetary support is greatly appreciated.

UPDATE: October 3rd, 8:30pm: via Shelli’s GoFundMe updates: Shelli is off of the ventilator and is breathing on her own.

UPDATE: October 2nd, 10:45am: Update from Chris Alvarado- “As Shelli is being weaned off of the Versed and able to receive more stimuli, she now gets to do one of her favorite things: hard physical work. Physical therapy began yesterday to work on range of motion. All of this is being done bedside, inasmuch as she is still in the induced coma (but making progress every day). She’s not quite ready for step-down, but we’ll let you know when she is.

That’s it for now. Keep those thoughts and prayers coming, and if you want to support Shelli’s medical staff on the 3rd Floor Critical Care Unit, please (PLEASE) communicate on the specific Facebook page first. Support is wonderful, but their first priority is caring for all of the patients at the CCU, all of whom have family and friends wanting the very best for their loved one fighting their own battles. Let’s be mindful of their needs and not distract the staff with conflicting orders and confusion. https://www.facebook.com/Thank-yous-for-the-third-floor-critical-care-unit-1110289052399640/

Be well, and Go Shelli!”

UPDATE: October 1st, 12pm: Shelli has been weaned off the drug Versed and is now on low dose of fentanyl drip. She is responding to deep pain stimuli and will flutter her eyes open. (randomly at this time) She is raising her right arm randomly but on occasion it does seem intentional especially with her family. #shellistrong

UPDATE: September 28th, 10:30pm: Shelli did well thru both procedures yesterday (tracheostomy and adding a feeding tube). She will receive another CT scan in this morning to make sure there has not been any additional swelling in her brain. Metro Life Flight has confirmed that they will be picking up Shelli in Montana today and bringing her back to Cleveland.

Shelli’s Family and Laura had a chance to visit the crash site and do a little advocacy to reminder drivers to watch for people on bikes. 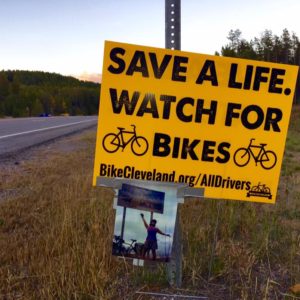 UPDATE: September 26th, 12pm: Update from Laura Faulkner: “This is a day by day, minute by minute journey. Shelli has been running a fever for a few days. This could actually be triggered by the brain injury affecting the regulation of her body temperature and isn’t permanent. This morning they took addition blood work and chest X-ray just to rule out any hidden infection. An additional CT scan has not been ordered for today. Shelli remains in an induced coma and on ventilation. Prayers, hope good vibes and Shelli love is needed in full force.”

UPDATE: September 24th, 1pm: This morning scans are holding steady. Shelli is still in an induced coma, still intubated and stable and some of her meds have been reduced to see if she will start moving her limbs. This can take days. It’s very important that the room is kept quiet to help her brain heal. If she is not reacting well or her stress level is high her level of sedation will be raised again. This is a trial period and your prayers and positive vibes are needed in full force. If all goes well we will be one step closer to bringing her home.

UPDATE: September 22nd, 11am: Pressure in Shelli’s brain increased overnight. She was just taken to emergency surgery to relieve the pressure and to most likely temporarily remove a portion of her skull. Please keep those prayers coming.

UPDATE: September 21st, 9:15am: The Neurosurgeon said the pressure on Shelli’s brain is staying low and she did have some movement when he had to do a procedure to place the pressure monitor in another position. She also has started moving her eyes under her lids and squinting a bit. Shelli is still in a medically induced coma. But they have started a tube feeding on her. Which is progress. Another CT scan in the morning.

UPDATE: September 21st, 10:30am:  Shelli is still being held in a medically-induced coma and is in critical condition and intubated. The CT scan taken on Tuesday (September 20th) of her brain shows no change. While this doesn’t sound good, the fact that she is stable is a Good Thing. She also went into surgery tonight to fix her arm. Friends with Shelli in Montana reported 10p eastern on September 20th that the orthopedic surgeon came out with the news that Shelli was stable during the surgery and that she now has a steel plate in her arm. Please keep Shelli and all her friends and family in your thoughts and prayers.

If you are on Facebook, you are welcome to join the CLE for Shelli page for continued updates and fellowship: https://www.facebook.com/groups/CLEforShelli/. There are also updated being posted on Shelli’s GoFundMe Campaign website.

UPDATE: September 20th, 10am: As of this morning Shelli is not breathing on her own, she is using a ventilator. She is going in this morning for a CT Scan and surgery to mend her broken arm. Please keep her in your thoughts and pray that the swelling in her brain lessens.

There has been an enormous amount of support for Shelli; her GoFundMe campaign has raised over $25,000 in 24 hours. This is a testament to the number of people who she has helped and supported over the years, we’ve heard that her family is overwhelmed and grateful for the thoughts, support and kind words that have poured out over the past 24 hours, keep ’em coming.

Per the hospitals request please refrain from calling the hospital regarding Shelli Snyder’s status. They’re being bombarded with calls and are unable to answer them. We will work our best to post any updated on this page.

Here are the latest news reports:

There is a fundraiser on Thursday, September 22nd at Platform Beer Co to support Shelli’s Medical and Cheer Fund.

UPDATE: September 19th, 3pm: There are two events taking place this week to offer a time of community and to help support Shelli:

On September 18th while riding through Montana, Shelli Snyder was struck from behind by a driver going 60mph in the town of Kalispell. The police and EMS were on the scene quickly. Shelli suffered injuries to her arm, leg/hip and a fractured skull. She went through surgery last night and is in critical condition.

Currently Shelli is in the hospital in a medically induced coma while doctors wait for brain swelling and pain to relieve. We know how strong Shelli is in mind, body and spirit and we hope you will join us as we continue to pray and hope for a fast recovery.

For those of you who don’t know Shelli, she has been a powerhouse for the cycling community across Cleveland. As volunteer and board member of Bike Cleveland she was always willing to give of her time and talents to grow our movement for safe streets. Her excitement and energy for helping people get on a bike is beyond belief.

Just as Shelli embraced and brought together the northeast Ohio cycling community it is our turn to come together around her. Please consider making a donation to the fund established to help with her medical costs and other needs she’ll have on her road to recovery and the journey back to her bike. https://www.gofundme.com/2ptgcefw

We will update this page as we hear more about Shelli’s condition. Please keep her and her family in your thoughts and prayers.

« Thank You Rob and Uche! Letter to CBS Radio and 92.3 The Fan re: The Ken Carman Show with Anthony Lima »