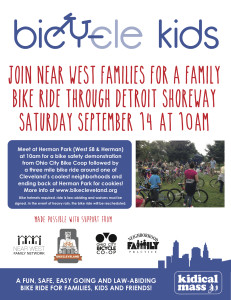 The ride will meet at Herman Park (W. 58th and Herman) in Detroit Shoreway at 10am on Saturday, September 14th. It will begin with a safety demonstration from the OCBC followed by a three mile bike ride around the neighborhood, and end back at Herman Park for cookies.

Bike helmets required and waivers will be filled out at the park before the ride. In the event of heavey rain the ride will be rescheduled. Follow the event on Facebook for all the details and latest updates. Download the event flyer to help spread the word.

Kidical Mass in Cleveland is sponsored by Neighborhood Family Practice.