Last December, the American Heart Association polled 600 registered Ohio voters (including over 200 cell phone users) about their opinions on healthy living and desires for proper infrastructure to support it.  Given how divided things tend be be in society as of late, one wouldn’t expect a strong majority to evolve out of the data.  Well, if you are a cyclist or pedestrian in Ohio, your expectations are about to be exceeded. 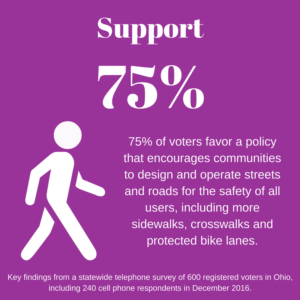 That’s right.  75% of voters WANT policies that aim for more complete streets, and facilities that make transportation safe and effective for a wide range of users – not just cars.  Properly designed streets allow not only those of us on bicycles to travel in safer lanes, but pedestrian safety goes up as well, since buffered bike lanes can reduce the open stretch of intersection a person on foot has to negotiate.  It’s win-win situation that 75% of the general public is behind.

75% is a pretty good number when you are looking for support. But are Ohio voters ready to take money away from existing projects and car centered spending in order to make it happen.  You would think not.  Maybe 20%.  40% if we are lucky, right?  Nope. 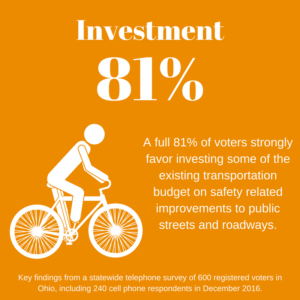 8 out of 10 polled voters strongly favor redirecting current dollars to these types of safety improvements in the public space.  It’s time to seriously reconsider where pedestrian and bicycle funding comes from.  It doesn’t need to always be new money for a new thing.  Bicycles aren’t a NEW thing.  And at last check, pedestrians have been around for awhile as well.  What changed mid-century was the focus on building everything around masses of automobiles trying to get everywhere with few hindrances, and little regard to how everyone else fares in the process. 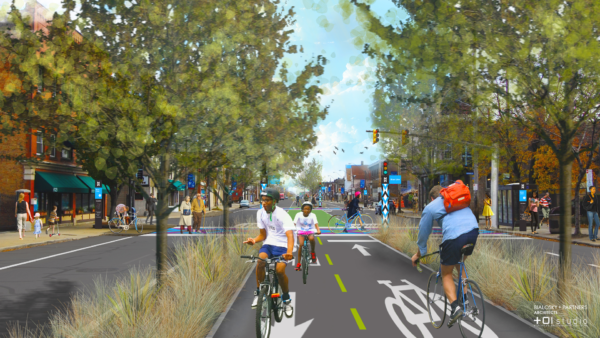 A simple phone poll shows that:

a. The vast majority of polled voters think that safer roads for all users are good.

b. They think money should be allocated to make it happen.

In the near future, we will be putting together a Candidate Questionnaire for the upcoming Cleveland Mayoral Election and one for City Council openings.  The answers from this series of questions will be compiled into a public resource that will allow you to know exactly where the candidates stand on issues like this that are important to you – to us – and to riders throughout the area.  Then, you can vote for those candidates that are willing to stand for changing the way we look at roads and infrastructure spending in Northeast Ohio.

“We all want and deserve to live in safe, healthy communities. Complete streets policies make communities and
neighborhoods more livable by ensuring all people can get safely to where they need to go – work, school, the library, grocery stores, or parks. They also help people feel more connected to their neighbors, which improves quality of life.”