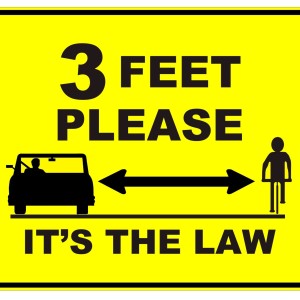 Progress continues on the statewide 3-ft passing law for the State of Ohio. House Bill 154 (3 feet passing clearance and proceeding with nonfunctioning traffic signals) had been assigned to the Ohio House Armed Services, Veterans Affairs, and Public Safety Committee and was unanimously approved by a 12 to 0 vote! The bill will now go to the House floor for consideration.

That means now is the perfect time for you to call your state representative and tell them  that you want them to support HB 154!

1.  The Ohio Revised Code in Section 4511.27 already requires that motorists pass bicyclists leaving a safe passing distance.  House Bill 154 sets the safe passing distance as “not less than three feet.”  21 states already have the “at least three feet” passing requirement.  During the last four years, six states have adopted the 3-foot rule.   The 3-foot rule is endorsed by the American Automobile Association and the League of American Bicyclists, the largest national organizations representing these two transportation modes.

2.  The Ohio Revised Code in Section 4511.132, already lists situations in which vehicles may proceed through an intersection controlled by a non-functioning traffic signal after stopping and yielding right-of-way.  HB 154 adds another situation where “Failure of a vehicle detector to detect the vehicle” results in the light remaining red.   This is a situation commonly faced by cyclists, as the bicycle is typically not detected by metal detectors buried in pavement, and the traffic light is not “tripped.”