The Mystery of the Orange Barrels

Late last month, social media reports and photos of the dreaded orange barrels placed in the bike lane on Detroit-Superior bridge began to emerge. They were in the eastbound bike lane, and when they popped up – the reason wasn’t readily apparent.  Putting orange barrels all the way down a priority bike route raised a lot of eyebrows.

As the answer explaining why came into our inbox, the reality on the ground began to emerge as well.

You are correct about this being a priority bike route into downtown. Unfortunately, the large work zone on W. Superior Ave. between W. 6th St. and W. 9th St. only maintains one lane of eastbound traffic to the east of the Detroit-Superior Bridge. For the safety of cyclists, we had to close the bike lane. Had we kept the bike lane open, cyclists would be forced to abruptly and dangerously merge into mixed traffic while crossing W. Huron Rd.

The traffic control plan for this work zone does include numerous shared lane symbols; they will be centered within the one eastbound lane that remains. The construction drums you see only are temporary; they will remain in place until the contractor gets favorable weather to resume the striping work. Note that when the drums are removed, the bike lane still will be closed. Paint will indicate that area is no longer open for bicycle traffic. – Andrew R. Cross, Traffic Engineer

As the huge work zone has materialized, the orange barrels (and the chevrons to come) make sense.  The bike lane would cause riders to get ‘pinched’ as they meet the tight single lane after crossing Huron.  So, for now, eastbound riders should utilize the sharrow and take the lane as needed when heading through this zone. 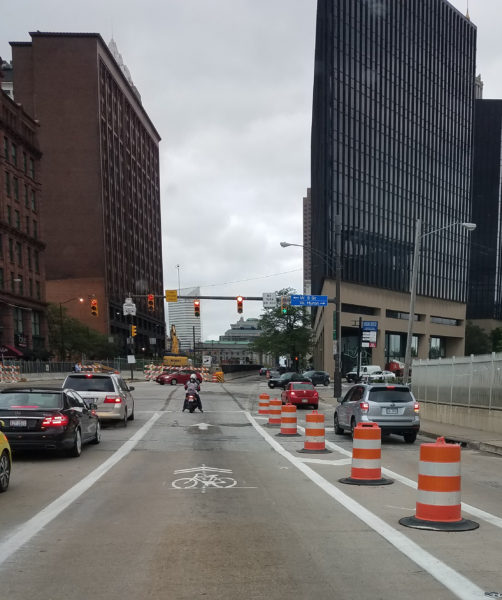