In case you missed it, there were two important public meetings held this past week (4/25) for two projects that will create far better connections along two of Cleveland’s primary bike routes; Veteran’s Memorial (Detroit-Superior) Bridge, and Lakeshore Boulevard.

Tuesday night was the first of two scheduled meetings focusing on improving the Veteran’s Memorial Bridge for bicycle and pedestrian access. The bridge is a known problem area and it is currently configured to handle traffic volumes that are no longer present. In the late 1960s, additional lanes were cantilevered outside the central arch and the sidewalks were narrowed from 15 feet to 5 feet. The north side of the bridge was improved over 10 years ago, but the southern most, eastbound lane, still exists as it did in 1970 when Cleveland had roughly double today’s population; meaning the bridge has excess capacity that can be better utilized for modern needs.

The meeting was designed as a workshop to engage the public and get feedback regarding current issues with the bridge. NOACA led the meeting and presented a history of the bridge, including recommendations from a 2001 study that was partially implemented. The goal is to identify missing links and hazardous conditions for bicycle and pedestrian travel on both sides of the bridge and to develop conceptual, low-cost alternatives that would improve conditions for bicycles and pedestrians on the bridge and connecting facilities on either end. People split off into working group and participants were invited to draw and write on aerial pictures of the bridge to identify issues with the current design and improvements they would like to see.

A recommendation from the 2001 study called for closing the cantilevered lanes to traffic and repurposing them for bike and pedestrian use. This topic was brought up several times in relation to the south lane and seemed to have strong support from people in attendance.  If you have not yet done so, please share your thoughts and opinions by completing NOACA’s survey. This information, along with info gathered at this first meeting will be used to draft recommendations that will be presented at a second public meeting in June. Final recommendations will be presented in July.

Thank you to NOACA, the Cleveland Planning Commission, and the Cleveland Division of Traffic Engineering for your leadership in addressing this important gap in our transportation network! We’ll let you know when the second meeting takes place and keep you updated.

Last fall we attended two public meetings regarding the future of Lakeshore Boulevard (LSB). Cleveland Traffic Engineering were looking to reconfigure Lakeshore from a 4-lane undivided road into a 3-lane configuration with a center turning lane and nice wide bike lanes. A design that makes perfect sense given LSB was on the 2007 Bikeway plan, the current 2014 Master Bikeway plan, Eastside Greenway plan, is part of the Lakefront Bikeway, and the Northern Tier Bike Route.

Last fall, many residents including Councilman Polensek were concerned with the proposed configuration and had several questions for Commissioner Rob Mavec regarding the project. Time ran out to stripe the corridor before winter, but Traffic Engineering used that time to conduct traffic counts and put together information for residents that addressed these concerns.

We reconvened last night (4/28) at Collinwood Rec Center for a meeting to specifically discuss bike lanes on Lakeshore, with a survey circulated by Councilman Polensek’s office and Northeast Shores CDC sent out prior to the meeting to gauge whether residents would like to see a dedicated bicycle facility on the road. Turnout was very good, and Commissioner Mavec did a good job of explaining what he would like to do and why, along with dispelling the myths and concerns some people had regarding bike lanes and bikes in general. 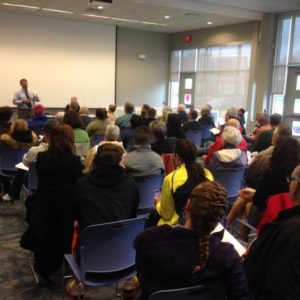 Full room for the public meeting

Councilman Polensek would rather not see bike lanes and when asked how he would vote on his survey as a resident he said he would choose sharrows. This is a shame since sharrows do little to improve the environment (we don’t like them for a bunch of reasons, but would like to see more research before saying they cause actual harm), but we believe he is committed to the process he set up and will go with what residents want.

There is plenty of room for bike lanes on Lakeshore, and traffic volumes are so low that the lane reduction would have a minimal effect according to Commissioner Mavec. Several residents cited speeding as a concern along the corridor and a desire to make the road more family friendly, while others like Cindy Barber (owner of the Beachland Ballroom) said she wanted dedicated bike lanes to service their employees and attract residents; particularly young people to the neighborhood. Multiple times pro-bike lane comments drew applause from the crowd and it was quite clear what the residents in the room wanted. They want bike lanes.

If you would like to share your thoughts about Lakeshore, particularly if you live in or near the neighborhood, we encourage you to take this survey. Councilman Polensek and Commissioner Mavec will take the results and the feedback received last night and make a decision on the future of Lakeshore. Thank you to Councilman Polensek for hosting and leading the meeting, and to Rob Mavec of Traffic Engineering for supporting bike lanes on Lakeshore Boulevard.

« Put us over the top! Leverage the match! Bike Month Event Rundown! »