Ward 16 Councilman, Brian Kazy, a Cause for Concern 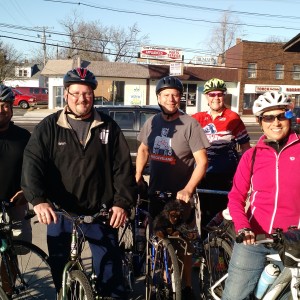 Thank you, Councilman Kazy, for joining us!

Following our response to comments made in the run up to the November 3rd election, Councilman Kazy agreed to meet us and some local area riders for a bike tour of Ward 16. The hope was to demonstrate to the Councilman the need for dedicated infrastructure, and illustrate the reality people on bikes face in his ward. 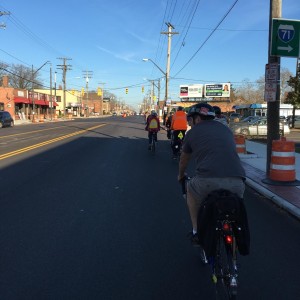 We took him on some busy streets with and without bike lanes, and asked him to contrast how he felt while riding on each. Information about the safety benefits of on-street facilities was provided, and we explained the reasons riding on the sidewalk is unsafe; regardless of the technical legality of the issue. Other points like the economic benefits of bike infrastructure, and equity issues surrounding our historical approach to transportation were also discussed.

information, and we’re really glad he was so willing to look at things from a different perspective by joining us for a ride. We think we dispelled a lot of misunderstanding, and helped Mr. Kazy gain a better perspective for people on bikes, and the need to include them in our roadway configurations.

Thank you to Councilman Kazy for being so open and receptive, and to everyone who came out to join us on the ride!

Perhaps you have already seen the video of Cleveland Ward 16 Councilman Brian Kazy discussing bikes with challenger Bill Ritter in the run up to the November 3rd election. If not you can view it below, but in short, both Mr. Kazy and Mr. Ritter do not like bikes in Ward 16. While disappointing, the fact that they do not like bikes is not the issue; it is their lack of understanding on the topic that is the real cause for concern.

Kazy defeated Ritter on November 3rd, which means we have a Ward 16 Councilman who doesn’t know basic law as it pertains to people on bikes, nor does he understand why bike infrastructure is necessary, or the reality people on bikes face as they attempt to navigate our city.

When discussing Lorain Ave, Kazy says, “I’m not a fan of the bike lanes and when we go to do [repave] W.130th next year it will be a hot topic”, Kazy promises. “But the city has their streets initiative [complete and green streets ordinance]. They want it to be easier transportation for those who don’t have cars.”

So, we’re to understand that Kazy is against improved mobility for people without cars, even though one in five people do not own cars in large swaths of his ward. When asked how people should navigate the area, Kazy suggests they use the sidewalk, yet he has no idea if that is even allowed. He says it “depends on who you ask”, and no one has been able to tell him if it is legal to ride on the sidewalk along Lorain or not, and he’s not sure anyone knows. Fortunately, Cleveland’s Codified Ordinances are readily available online:

In case you’re wondering, Lorain Ave in Ward 16 is zoned almost entirely “General Retail Business” and obviously a business district. Kazy then says he would be open to introducing legislation to change any law that makes it illegal; apparently unaware that the Ohio Revised Code prohibits such action. Here is the relevant language from the Ohio Revised Code:

The candidates repeatedly cite safety concerns of riding in the street for eliminating bike lanes, obviously unaware of the mountain of statistics that prove dedicated bike facilities reduce crashes and increase safety. Not only that, but they are unacquainted to the hazards of sidewalk riding, and the fact that riding on the sidewalk is much more dangerous than riding in the street. Lorain Ave in Ward 16 is 25mph, not 35mph as Kazy states.

Challenger Bill Ritter then rolls out an anecdote about cars illegally driving in the bike lanes on Puritas Ave as a reason they should not exist. Worse, he thinks that because people on bikes are not the majority, he has no responsibility to serve them. It’s disappointing that these two don’t think a Councilman’s job is to serve ALL of their constituents.

It is troubling that Mr. Kazy has so willingly formed an opinion on an activity he seems to know little about, and would actively block the proliferation of bikes in his ward despite the many benefits they bring. We should expect more from our elected officials. At the very least we should demand they understand the issues they take positions on. It is irresponsible for someone with so much power to be so uninformed. If you would like to share your opinion with Councilman Kazy on this issue, you can email him at – bkazy@clevelandcitycouncil.org