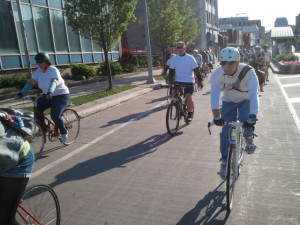 Over the past two weeks at least eight bike-car crashes  have been brought to Bike Cleveland’s attention.  They have been recorded throughout Greater Cleveland. As an organization which advocates  for safer streets for people on bicycles, we are alarmed and saddened to hear about such a high concentration of recent  crashes.

To facilitate our advocacy work, Bike Cleveland compiles a database of cyclist-motorist incidents and crashes.  Disturbingly, the majority of crashes reported to Bike Cleveland share the common theme of motorists not respecting the rights of cyclists on the road either by turning into their paths when they have the right-of-way or running down a cyclist and then leaving the scene (5 out of 8 of the crashes reported to Bike Cleveland were hit and runs).  These crashes  run counter to the commonly held misconception that most cyclist-motorist crashes involve the cyclist running a red light or not generally following traffic laws. They also signal the continued strong need to educate motorists on cyclist right-of-way as well as the dangers of distracted driving. Finally, these incidents underscore the  need for stricter penalties for motorists involved in bicycle crashes.  In short, the “I didn’t see them” defense should never be considered an excuse but rather  an admission of inattention to the road and penalized as such.

As advocates working for safer streets, Bike Cleveland believes people should be responsible for moving carefully and without harming others, whether they are riding a bicycle or driving a car. As bicycling grows among all demographic segments, motorists should become accustomed to seeing more and more  people on bicycles and show them the  respect which their place as an authorized road vehicle accords them. Cyclists have as much right to operate on the road as any other vehicle and motorists need to become educated to this fact. Regardless of how we move around our streets, we all must hold ourselves to the highest standard of safety and prioritize vulnerable road users such as cyclists and pedestrians for particular caution.

If you or anyone you know has been in a bicycle crash involving a motor vehicle,  Bike Cleveland urges  you to both file a report with your local police department AND complete our crash  survey found at BikeCleveland.org. This information will allow us to identify high incident  locations and advocate for increased enforcement and /or safety improvements in areas identified as especially dangerous.

To address the growing number of crashes, Bike Cleveland will be taking the following immediate actions:

If you are interested in getting involved with any of the actions listed above, please contact Jacob at Jacob@bikecleveland.org.

While we are alarmed by the recent number of bicycle/vehicular crashes, we nonetheless must not quit riding.  The more cyclists are out on the roads,  the more accustomed motorists will become to their presence and the safer our streets will become for everyone.  Each new  person biking is reason for celebration as they are doing their part to declare that bicycles are here to stay. Bike Cleveland is proud of  the progress we have made  in 2014 towards safer streets:

Safe Routes to School – worked with ODOT, NOACA, Cleveland Metropolitan School District and the City of Cleveland to apply for and receive funding to implement a district-wide safe routes to school travel plan. The plan will identify infrastructure and programming improvements to make our streets safer for students to bike and walk to school. The planning process will kick off in the fall.

Ride Together Campaign – continued with the Ride Together public awareness campaign through radio PSA’s and bus advertising.

“No matter one’s opinion of cyclists or their riding habits, they are practically defenseless against the smallest sedan, never mind an SUV or a truck. Drivers simply have to take the high road — not only around cyclists who abide by the rules of the road, but even around selfish cyclists who don’t. Shaving a few minutes along the way can’t possibly outweigh the risk of maiming or killing a fellow human being.” – Boston Globe Editorial