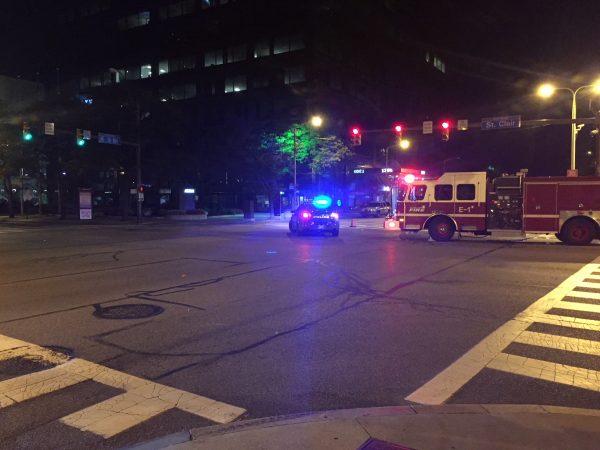 19 year old Scott McHugh admitted to the Cleveland Police Department that he snorted heroin shortly before hitting and killing another human being. He was found unconscious inside a Chevy Cruze, his homicide weapon, suspected to be from an overdose that was likely in process while careening down E9th Street on Saturday night “well in excess of the posted speed.”

A 21 year old woman is the victim in this story, as she was the one also fatefully traveling southbound on E9th Street at the same time. Her name is Jenasia Summers, and she was riding a sit-down electric scooter. Our hearts ache for the family and friends of Jenasia.

Aggravated Vehicular Homicide is the charge for the automobile driver, yet many of the post-crash media reports are unbelievably focused on the scooter.

The scooter is not the problem. The problems are our outdated road designs and motorists who have no regard for public safety whether its alcohol, drugs or distraction while driving.

Scooter riders, just like those on bicycles, are woefully exposed to greater danger traveling city streets that are designed with automobile traffic as the primary concern. While bicycle infrastructure in the city is improving, the pace is too slow. More people are riding bicycles, more non-car alternatives are upon us and/or inbound (be it Bird scooters, or advancing dockless bikeshare fleets, e-powered or not) and more people are coming to downtown as residents and visitors than ever before. The need for BETTER and PROTECTED networks for bicycles (and scooters, and e-bikes and whatever may be on the horizon) is HERE NOW and without it, the city’s ability to move into the future is severely hindered.

It should be noted that E. 9th Street (where this horrific crash occurred) has been repaved twice since the City passed a law, the Complete Streets Ordinance, requiring that all road projects take into account the safety of all road users in the design. Yet, the design still reflects a deep priority towards people driving automobiles, and does not safely accommodate people using other modes of transportation.

People want to travel through Cleveland safely by means other than cars. The fast public adoption and ridership of the Bird scooters (already seeing almost 7 rides each per day) is clear evidence for this. The pace of road modernization needs to keep pace with demand, and the safety of road users hangs in the balance.