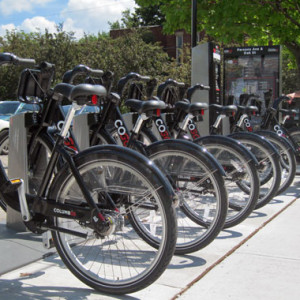 “COGO” Columbus Bike Share. A picture you will soon be seeing in Cleveland.

Good news for fans of bike sharing in Cleveland! After completing the requisite paperwork and getting through all the necessary red tape, we are happy to announce the formal release of the Cleveland Bike Share RFP! The formal request for proposal was sent out to multiple bike share vendors around the country, and is hereby publicly posted. What now you may be asking? Well, bike share companies have until Oct. 19 to submit proposals, followed by a two week review period. A vendor will be selected by October 30th and can start laying the groundwork for a spring 2016 roll out!

A full scale 700 bike, 70 station system as described in the 2013 feasibility study is no small project, and it should be noted that the $446,000 in federal funds and the local match is not enough to foot the bill entirely. It will be up to the bike share operator (with help from us and other locals) to generate additional funds through private sponsorship (Citibank’s “Citi bike” in New York, for example) as well as seeking additional public dollars moving forward. We’ll know more when we get the responses from the RFP, but an initial launch of a couple of hundred bikes is expected to be possible with this first round of funding.

Mike Foley, Director of Sustainability for Cuyahoga County said, “This puts a team on the ground, helps them start to purchase equipment and do fundraising going forward.” Ultimately, the goal is to have a network that can operate without public dollars after five years.

Full details, including a downloadable version of the RFP can be found at BikeCleveland.org/bikeshare/

Contributors to the local match so far are: