Last Saturday (March 12th, 2016) we had the privilege of hosting over 200 local cyclists in Brecksville for a public awareness rally revolving around cyclist’s right to the road and to address our safety concerns.

The event was in response to the recent acquittal of Timothy Wolf who killed two people on bikes and injured 3 others on September 17th, 2015 when he made an illegal left turn into them. The trial, and subsequent “not guilty” verdict had sparked outrage with many area cyclists as the victims were within their rights of the law and had the right of way when they were struck. Wolf initiated a left turn into oncoming traffic when he claimed he couldn’t see and had an outgoing text message at the moment of impact. 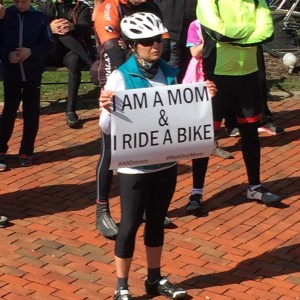 The families of Matt Billings and Jim Lambert (the two victims who lost their lives) spoke at the rally, and called for motorists to take more care and pay more attention while operating a potentially lethal machine. “As a result of Mr. Wolf’s recklessness, my daughter and I have been sentenced to a lifetime without a father and husband. The legal system may not hold Mr. Wolf accountable for crashing into my husband and killing him, but I do,” said Rebecca Billings, Matt’s wife.

Messages about being good ambassadors and setting a positive example as cyclists were also discussed. “We deserve respect, but we need to make sure we give it back,” said Rob Thompson of Bike Cleveland; while local riders Matthew Weeks and Kathy Armada shared their stories, and reminded us that we have a responsibility to the rest of the cycling community to show ourselves in the best possible light by following the law and not escalating bad situations.

Mostly, however, it was a time for people to come together and demand better from the motoring public. “Just because you are bigger and faster when you drive a car does not give you more of a right to the road,” said Jacob VanSickle, Executive Director of Bike Cleveland. “You have a responsibility to respect all road users, and recognize that you are capable of hurting and killing people from behind the wheel. Slow down, calm down, and you can save a life.” VanSickle concluded.