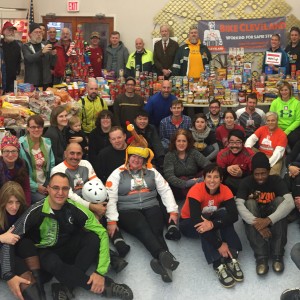 All smiles after seeing how much food we gathered!

The holidays are great, but for many, they are a tough time of year; especially for those who don’t have enough food on the table. So last Saturday, we were proud to host our 4th annual “Cranksgiving”, a food drive on two-wheels. We were lucky to have 70 cyclists show up to the Deaconess-Krafft Center in the Old Brooklyn neighborhood, and together we bought over $1,800 worth of groceries to donate to The Hunger Network of Greater Cleveland and the Old Brooklyn based Senior Citizen Resources. 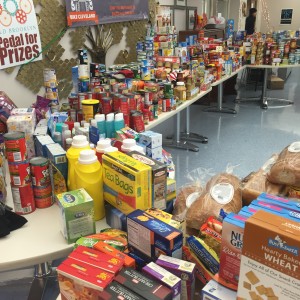 All of this hauled by bike!

Participants showed up and received a map of nearby grocery stores, and we challenged them to ride their bikes to four stores and purchase food items for donation. The fun part is that everything purchased had to be hauled by bicycle, either in a bag, pannier, rack, or trailer. We asked people to spend roughly $15, or whatever they could afford, but the average amount spent per person exceeded $25!

Bikes of all shapes and sizes participated!

Cranksgiving was started in 1999 in New York City by a bunch of messengers, and the idea has spread all over the country, and even has international events as far away as the UK and Australia! Proving that you don’t need to be from North America to appreciate the spirit of Thanksgiving. Thank you to everyone who rode, helped organize, hosted, or was involved in any way. We are pleased to be able to help the Hunger Network of Greater Cleveland with their amazing work, and we look forward to growing the event in the years to come! If you missed it this year, look for it in 2016. It’s a great time for an even better cause.