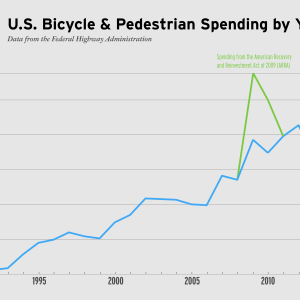 Last Friday, President Obama signed the first long term transportation bill in 10 years, the five-year, $305 billion “Fixing America’s Surface Transportation Act” or “FAST Act”. Despite being under attack for years, for all intents and purposes, the Transportation Alternatives Program (TAP) responsible for funding much of our bicycle and pedestrian infrastructure remains largely intact; although it will now be part of the Surface Transportation Block Grant Program.

The bill is good news for bike/pedestrian interests and includes a bump in funding, while providing certainty for local governments looking to embark on major projects. Some of the highlights include:

We have some concerns about how the FAST Act is being funded, and we would have liked to see Washington address the 18.4 cents per gallon gas tax that isn’t adjusted for inflation, and has not been raised since 1993. Congress had to be creative with the funding mechanisms for the bill because Republican law-makers have signaled that any transportation bill that called for an increase to the federal gas tax would be dead on arrival.  The federal government currently spends about $50 billion annually on transportation projects, while the gas tax only generates $34 billion in revenue; a number that will continue to shrink as cars become more fuel efficient. Ultimately, the gas tax will need to be addressed (if not scrapped altogether in favor of a VMT tax) if the federal government is serious about sustainable transportation funding.

That said, considering that bicycle and pedestrian funding has constantly been under attack for years, it is great to see it preserved in the new bill. Each year, we attend the National Bike Summit in an effort to convince lawmakers to keep funding for bikes and pedestrians. We applaud Congress for passing a bill favorable to alternative transportation interests, and look forward to addressing other issues when we go back to Washington in March, 2016!