Kickin’ it with the Neighborhood Kids 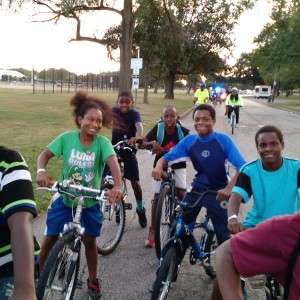 Last week Bike Cleveland, along with the Greater Cleveland Sports Commission and the Ohio City Bicycle Co-Op visited the Zelma George and Hamilton Rec Centers in the Buckeye Shaker and Mount Pleasant neighborhoods as part of the GCSC’s Urban Youth Initiative. OCBC hosted a “Fix-A-Thon” where neighborhood residents could bring their bikes and have them fixed for free. Meanwhile, we equipped dozens of bikes with front and rear lights; the same lights we recently handed out as part of our Random Acts of Brightness event.

Once everyone’s bike was fixed, and lighted properly, we had planned to host a rolling “bicycle audit” with parents and community residents to gather data about road conditions and other barriers to cyclist and pedestrian safety in the neighborhood. The goal is to promote more active forms of transportation by understanding what we can do to make it easier and safer to get around by bike or on foot. This work is part of our “Neighborhood Safer Streets Program” that is funded through the Centers for Disease Control’s Racial and Ethnic Approaches to Community Health (REACH) program. Upon conclusion of the ride, participants fill out a survey identifying problem areas that need to be addressed. We hope to form “Bike Advisory Committees” of local residents that will empower them to bring meaningful change to their communities.

However, new programs like this often have unexpected outcomes as was the case last week. We had dozens of neighborhood kids attend, excited at the prospect of getting their bikes fixed and being outfitted with lights. Naturally, they all wanted to go for a ride afterwards! The sheer number of children forced us to adapt, and we ended up doing an impromptu bike parade with a full police escort courtesy of the 4th District officers! We still managed to gather some data, but the unanticipated benefit was seeing the kids excited to ride their bikes with the police, and generating a positive interaction between residents and their local law enforcement. It’s not what we planned, but it was a lot of fun and a great event! You’ve never seen kids who can wheelie as well as these kids could!