A common barrier facing new or returning riders is figuring out where to ride safely.  They may have thousands of driving miles under their belt, but the prospect of traveling just a few bicycle miles can be daunting.  This often stems from assuming that the route you take in your car would naturally be the one to ride as well.  The thought of traveling those busy roads can be a serious deterrent to a novice.  But as any seasoned cyclist knows, that is far from the truth. So how do we help remove another barrier?  There are a few ways we can get you headed in the right direction.

Things you can do right now:

Many smartphone users are accustomed to using Google Maps to get to and from unfamiliar places.  What a lot of users don’t realize is that there is a Cycling setting within that powerful mapping app.  It will choose better roads based on lower speed limits, bike infrastructure (like bike lanes) or even bike paths when available.  Sometimes the route may be slightly longer, but the payoff is a lower stress and hopefully more enjoyable route to your destination. Look for the small bicycle icon on the smartphone app, or the Cycling setting on a PC.  It’s a great first step in finding a better option for your commute or any other venture into unfamiliar territory.

When you see Bike Cleveland at events, we are often displaying a stack of maps from our partners at NOACA.  They have them available for several northeast Ohio counties – we generally focus on the Cuyahoga County map since that is our home base.  A great feature of these maps is the color coding of suggested bike routes.  The entire street system is there but bike lanes, routes, suggested connector streets and paved trails are called out.  It’s a super resource for finding your way around Cleveland and other supported areas. 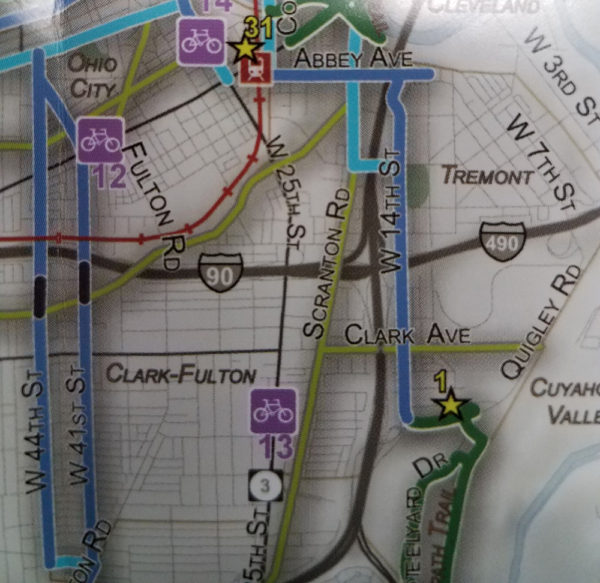 Things in the future:

One of the possible changes to bike route mapping could be the simplification to a more bus route/subway color coding and graphical layout.  It would help riders visualize how to move from point to point through a city and perhaps be less intimidating.  The actual route marking and mapping would have to follow the true route, but representing the network in a more user friendly manner would ease that initial apprehension to taking off on 2 wheels.  Here is a project based on the mapping used for the London Underground, and applied to Washington D.C. 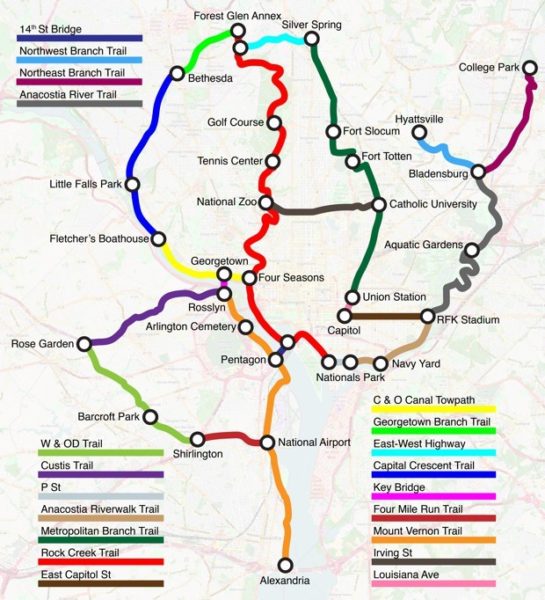 And a look at the map from the proposed Midway Protected Route Network here in Cleveland that follows a similar format, since user friendliness for all types of cyclists is a priority as you begin to link neighborhoods together.  This is why the work we do is so important to the future of cycling in Northeast Ohio.  To encourage more and more people to think about bikes as a superior alternative to getting from place to place, they need to be able to easily envision how to accomplish it.  That vision, combined with proper infrastructure to move bikes through the city safely are keys to making Cleveland a city where bicycles are the “go to” method to get from place to place. 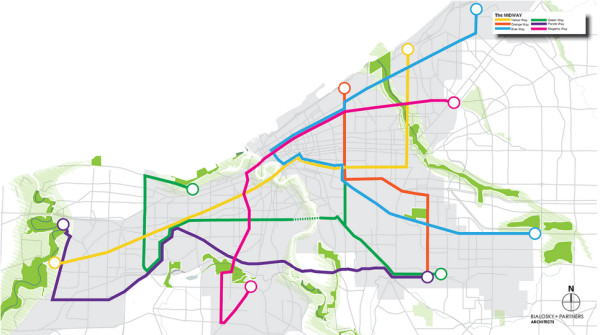 In addition, Cleveland may be one of the pilot cities involved in the initial program of a tech offering called lanespotter. They are building a website and mobile app that helps cyclists find the safest routes from Point A to Point B.  It uses local riders’ inputs into the app to strengthen the data pool used to suggest the best roads.  Real input from real local riders like you.  Ultimately, the data collected can be used by Bike Cleveland to help influence the city to improve their bike infrastructure in the most needed areas throughout the city.  For additional resources about getting around Cleveland by bike, check out our resource page built to do just that.