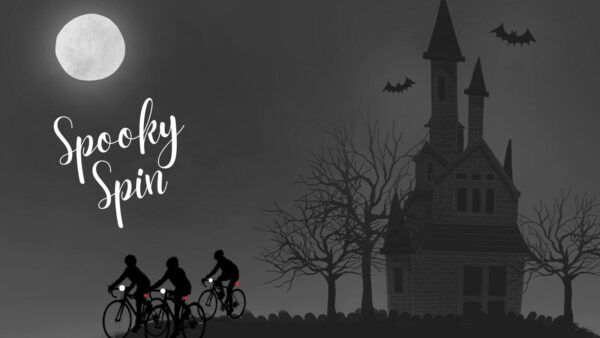 October brings shorter, cooler days – and darker, spookier nights! It all culminates at the end of the month with Halloween, but in a COVID world, we’re all looking for new alternative ways to experience things with so many restrictions still in place.

That’s why we’re bringing you this Spooky Spin to haunted sites in and around Cleveland. Cleveland is packed with old buildings that have varied pasts, and that makes them ripe for haunting – and perfect for seeking out. Our locations and descriptions are pulled from this cleveland.com article from 2019, so we’re sure the ghosts haven’t gone anywhere. There are two ways to explore:

Either way, before you head out take a few and brush up on your knowledge of Bikes and the Law, find some tips about Getting Around by Bike, or read up about becoming a Bike Cleveland Member. If you are headed out at night, make sure you have a white front light and red one on the rear – it’s state law!

Here are some sites within a few miles of downtown, with a short description from the article:

Agora Theatre: “Somewhere along the way, it is said to have picked up the Ghost in Yellow, who is said to haunt the stage and backstage areas to this day.”

Drury Mansion: “Lore says two policemen in the 1970s were terrified to be in the building, which has also been a boardinghouse and a home for unwed mothers.”

Erie Street Cemetery: “It’s said the spirit of Joc-O-Sot, the tragic Sauk chief who died while touring Europe in a “Wild West show,” is still restless and roaming this downtown cemetery.”

Franklin Castle: “In the early days, several of Tiedemann’s children died in the home under mysterious circumstances. In later years, its tunnels and hidden passages allegedly made it a Prohibition favorite…”

Gray’s Armory: “The out-of-this-world residents include the dancing Lady in White, who may have been a regular when this was a Prohibition-era speakeasy.”

House of Wills: “Long before it was an abandoned funeral home — with some of the quirkiest viewing rooms in Cleveland, like the Cloud and Egyptian-themed spaces — it was a notable civil-rights-era gathering spot.”

Midwest Railway Preservation Society: “The dead on the train, which passed through Cleveland and crashed in New York state, included six Clevelanders.”

Playhouse Square: “It’s no surprise Cleveland’s largest theater complex is said to be haunted by numerous ghosts. Each has its favorite theater…”

Renaissance Cleveland: “One of Cleveland’s oldest still-standing hotels, it opened as the Hotel Cleveland in 1918 and is said to have several permanent residents from the other realm.”

Soldiers’ and Sailors’ Monument: “Many ghost hunters here have said they temporarily lost power in their camera and batteries downstairs, then found it was restored later.”

Variety Theatre: “Colvin says another ghost many visitors have seen is “a woman in a white dress in the back of the auditorium. Her name is Clara, and it’s believed she performed here.”

And as promised, a spooky loop of Cleveland that visits the sites above: