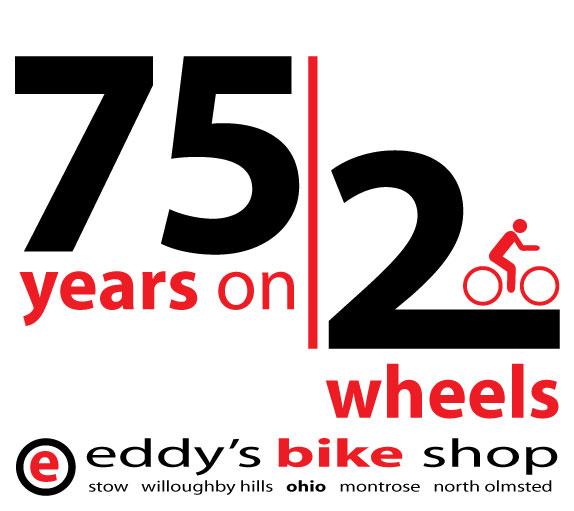 As part of our Bike Cleveland Business Member Series we will be having a Bike Cleveland Social on Saturday, June 13th @ 6pm – 8pm. Come and hang out with us and the Eddy’s crew; drink some beers, eat some food, and check out their North Olmsted location (25140 Lorain Rd. North Olmsted, 44070)

We will have free beer and food, a raffle with merch from Bike Cleveland and Eddy’s, the blender bike, bike themed games (hint: one involves fat bikes) and if you renew your membership or sign up to become one during the social, get 50% off your dues!

Let us know you will be joining us and invite your friend on Facebook.

The first 15 people to arrive on bike get a free Eddy’s pint glass.

I stopped by Eddy’s Bike Shop in North Olmsted recently and sat down with the Owner and General Manager Jimmy Ruggles, along with their Marketing Director, Jason Kuhn.

If you don’t know, Eddy’s is a long time staple in the Cleveland area with four locations, and they recently celebrated their 75th anniversary. Despite being one of the biggest players in the local bike shop community, Eddy’s is still family owned and operated, with Jimmy being the grandson of the original Eddy. Here is what we talked about –

Eddy’s is a family owned business. How did Eddy’s start? What was the motivation?

Jimmy – “Eddy’s originally started in 1938 at the Stow location, but back then it wasn’t a bike shop, it was a general 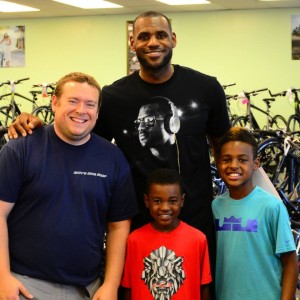 The King with Zack, the Montrose Store Manager

resale store named “Eddy’s Market” that sold everything; food, deli meat, coal, you name it. It wasn’t until 1940 that bikes started mixing in. In the 60’s and 70’s we started seeing the “English Racers” enter the country, and that is when Eddy’s started looking more like a bike shop, although we still sold other things. BMX hit in the 80s and was big in Stow because of the Stow BMX Track and that is when Eddy’s became dedicated to bikes; mountain bikes arrived around the same time and we sold a lot of Schwinn KOMs back then.”

Cool history! As you mentioned you have four locations, and we’re sitting in the North Olmsted store. Are there unique attributes of the different locations? How does that work? 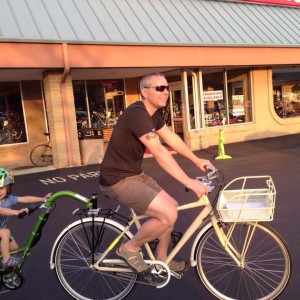 Jimmy with his boy, Kael

“Stow is the original store, and still remains the main hub of our operations.   North Olmsted is the most modern due to the renovations you can see, and a strong second to Stow in the fitting arena (Eddy’s offer a full range of bicycle fitting services -Ed) with three fitters at N. Olmsted and six at Stow. We have a mix of Specialized Body Geometry fitters and SICI (Serotta International Cycling Institute) across our locations. Montrose and Willoughby Hills are smaller version of what you see here.”

“We tried to keep things consistent in the past, but we increasingly realized that different locations and staff create different atmospheres based on their individual expertise and passion, so we have allowed that to develop a little. We think it’s good for our customers when the right staff person with the right background and passion for that discipline is the one helping them. Obviously, all our staff are knowledgeable across the full realm of cycling, but to ignore individual traits of our workers would be a mistake we think. Staff can affect the product mix you see to a degree because they like to stock things they can really speak to.”

Why do you choose to support Bike Cleveland?

Jimmy – “Jason was part of the original summit that helped create Bike Cleveland and was excited about it from the beginning. He said, “If this sticks, this is going to be great!” and Jacob has done a lot over the last 3 years.” 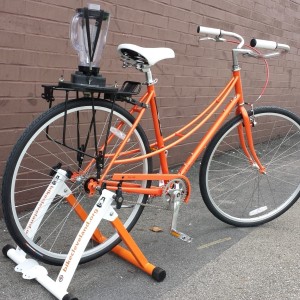 Jason – “I’m excited about the future with Bike Cleveland on the scene. We all ride, why wouldn’t you support advocacy? We sell bikes, so we’re in the business of supporting cycling everywhere, and that’s what Bike Cleveland does. The more infrastructure and policy that makes cycling easier and more accessible is good for us. A high tide raises all boats.”

Where do you like to ride? Do you have a preferred bike, trail, or route?

Jason – “My mountain bike go to is a Fuel EX 9.9. But time constraints mean that I ride my fat tire touring bike on the road a lot. I’m a pretty busy guy so being able to ride from my door is key, and that’s where the road riding comes in. Mohican State Park is my favorite trail, but I like Royalview, too, because it’s close. It’s great to see the Metroparks adding trails a lot closer to Cleveland.”

What have you noticed about cycling in NE Ohio? How has it changed in your long tenure as a shop in the region?

Jason – “I think more age groups are coming out, and the age gaps are shrinking. Old school BMXers and mountain bikers are still riding and now their kids are riding, too. High school kids are riding more seriously with better trail access and some colleges having cycling teams and scholarships. Access is getting better with the Metroparks, and cycling in general is reaching a wider audience. Can you imagine if we had the trails we have now back in the mountain bike boom of the 90s? The road infrastructure is getting better, too.   People are slowly learning that bikes are allowed and it’s getting easier to share.  Sharrows and bike lanes are doing their job and creating osmosis induced learning. It’s still not perfect, but it’s moving in the right direction.”

You do a lot of good work promoting women’s cycling. Tell us more.

“We have been looking at the women’s market for some time, tracking it over the last few seasons, and definitely 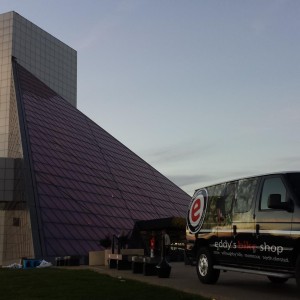 noticed a spike in recent years. We thought, if we’re going to do this we should go all in and do it properly; dedicating more than a few hundred square feet to women’s gear and apparel. A lot of the women’s specific stuff is new to the market and you need to showcase it well and get the attention of the people who have historically been underserved by the cycling industry and show them that they now have sophisticated options.”

“Stow dedicates 4,000 sq ft. of space to WSD, and two of our brands Trek and Specialized do an excellent job of making WSD equipment. Women make up half the population, so we want to make sure they’re well represented in our stores, and that’s why we have six female staff members who can really speak to the gear unlike any male staff member can. We want women to come and shop with us, so we take WSD seriously, and want to capture a clearly growing market.”

What is your vision for the future? 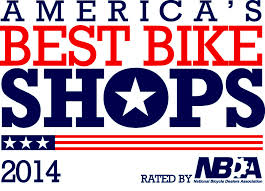 Always up there with the best

“In the short term we just want to make this season as fun as possible and get people riding. We have

maintenance classes for bike month, and this summer we’re really getting into the brewery collaborations and doing a bunch of “bike night” events. We’ll have events with the Brew Kettle, Fat Heads, and Portside breweries. It should be a really good time (check out the community events calendar on bikecleveland.org, we have them all listed –Ed). In years past we have sponsored “Take a Kid Mountain Biking Day” with IMBA and Specialized, and we will be returning to Royalview in July to do another round of “Youth Mountain Bike Progression Sessions” this year. We think it’s really important to get kids stoked on riding and engaged in an active hobby like cycling. 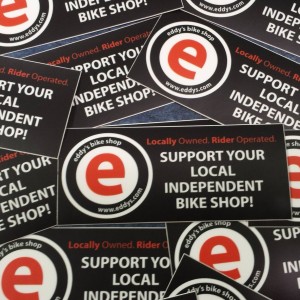 Hell yeah you should!!

Beyond that, we want to teach people that you can use bikes to go places, and once you learn that, people start thinking, “where else can I go? can I ride to work?” It’s fun seeing the cultural shift happen. Bikes are starting to click with people, and that’s a trend that we think will continue, and we want to help push it along as best we can.”