It’s been another productive year here at Bike Cleveland, and we’re proud of what we have accomplished on behalf of cyclists on the streets of our favorite city. Over the last 12 months, we:

1. Saw the installation of a protected, green painted bike lane on Detroit-Superior Bridge in coordination with the City of Cleveland and NOACA. This project still includes the future installation of Cleveland’s first bike signal and 2-stage bike turning boxes – due in the spring.

2. Continued fostering the growth and expansion of the UHBikes Bikeshare network, which to date has tallied up over 29000 trips and 60000 miles while introducing users to a better way to move throughout the city.

3. Helped grow Cleveland’s Open Streets Movement, ciCLEvia, which temporarily reclaimed roads from vehicles in 4 different Cleveland neighborhoods while returning the space to the community, promoting active transportation, recreation, and health to over 7,000 attendees.

4. Advocated for an additional 7 new miles of bike lanes on Cleveland streets bringing the grand total up to 59.

5. Improved youth bicycle safety in Cleveland’s Central neighborhood and in Brecksville through on-bike education and fix-a-thon events, including the distribution of over 60 free helmets. 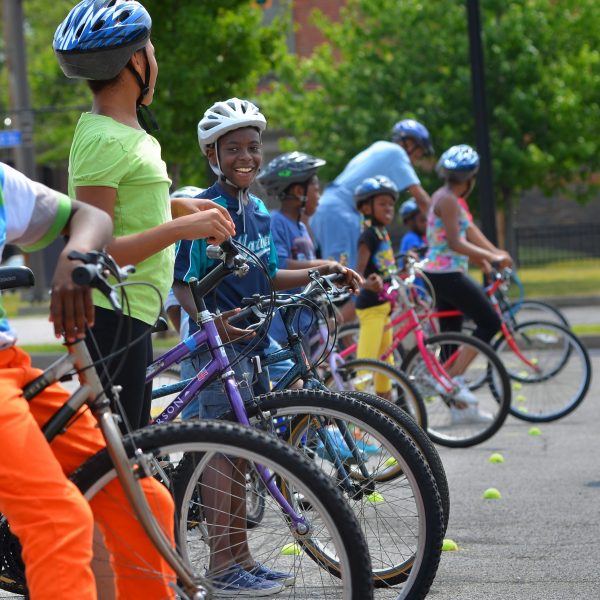 6. Successfully counselled and provided classes to the NEORSD in order to receive national recognition on the League of American Bicyclist’s Bicycle Friendly Business award list, as well as partnering on their first bicycle facility tour.

7. With continued success, Bike Lakewood saw bike lanes added to Warren Avenue and Clifton Blvd Extension, which adds to those already in place on Madison Avenue.

8. Trained an additional 41 Greater Cleveland police officers on how to enforce laws to prevent bicycle and pedestrian injuries and fatalities.

9. Distributed 500 free light sets along with safety tips to improve the safety of people riding at night.

12. Educated over 65 adults on a wide range of cycling topics through an in-house Bike Smarts Education Series.

13. Advocated for the passage of the statewide 3ft passing law and provided tools and education to help local law enforcement officers enforce.

14. This is a big one! In the last few weeks of the year, we saw a major announcement about funding for 2 transformative projects. NOACA allocated $8.3 million for construction of the first leg of the The Midway – Cleveland’s Protected Bikeway Network, and $6.1 million for the Lorain Avenue Cycle Track, which will run from West 20th to West 65th. These protected facilities, along with the work on the Detroit-Superior Bridge, will usher in a new future of safe, multi-modal transportation on Cleveland’s streets!

We do this with the support of engaged local partners, members, and YOU! Make your mark on the future of Cleveland by becoming a new member, renewing your expired commitment, or making a donation right now at the end of this amazing year. The years directly ahead of us will see major improvements to the cycling infrastructure in the region – don’t miss the opportunity to be part of this movement!