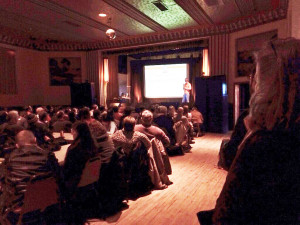 The presentation outlined what we accomplished in 2013 including:

Many of these accomplishments would not have been possible without the dedication of many volunteers. During the meeting Bike Cleveland volunteers Ted Ferringer, Melissa Thompson and Ben Stewart were awarded with Bike Cleveland’s 2013 “Guardian of Transportation Award” in recognition of the time and talent they contributed to Bike Cleveland in 2013.

In addition to looking back on 2013 we also announced our plans to make our streets safer and bicycling more accessible in 2014. The plans include an aggressive plan from the City of Cleveland to add more than 70 miles of bikeway by 2017. See the plan, and the full presentation from the Annual Meeting, below.

Thanks to everyone who helped to make 2013 a huge success. We look forward to building off those successes in 2014 as we continue to make our streets safer for people on bikes.

Here is the news coverage from the annual meeting and the City of Cleveland’s announcement to connect neighborhoods by adding 70 miles of bikeways:

WEWS Channel 5 Cleveland: Cleveland to add 70 miles of bikeways over next 4 years.

WCPO Channel 9 Cincinnati: Cleveland to add 70 miles of Bikeways over next 4 years.