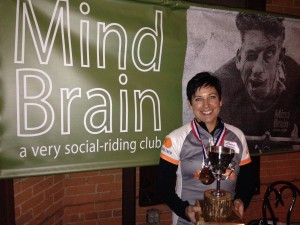 Cleveland Beats Pittsburgh in the Rust Belt battle of the Bikes.

The competition is based on a points system that rewards riders of all skill levels for getting on their bike daily and for the number of miles pedaled. Twenty bonus points were awarded for each day a rider used their bicycle plus a point for every mile they rode.

Last year Pittsburgh took possession of the Rust Cup because their riders had earned more bonus points for riding their bikes more often. This year Cleveland turned the tide and took back the Rust Cup with a winning point spread of 275.300 over Pittsburgh.

Bike Cleveland, the area’s bicycle advocacy organization, announced the return of the Rust Cup trophy at an event held at the Flat Iron Cafe last Saturday evening. The event was also a celebration for Team Mind Brain Social Club, a local team made up of all Cleveland area riders, who placed #1 Nationally in the National Bike Challenge.

Every cyclist who participated in the challenge and logged their miles played a big part in bring the Rust Cup home to Cleveland. From new riders who just returned to biking, the riders who commute by bike, to the experienced road cyclists, this is their win.

You can bet Pittsburgh will be back next year with even more determination to beat Cleveland. But Cleveland will be ready to battle again!

« NEOCycle draws 20,000 to Edgewater Park, including 650 riders for the first Forest City Fundo, presented by Bike Cleveland Support Safer Streets by voting NO on Issue 35 »