After much anticipation, many emails and postcards sent to the City of Cleveland, and countless discussions on unexpected delays the paint is finally making it to the pavement for the Detroit Avenue bike lane. Here is the most recent update from the City of Cleveland Commissioner of Streets that was forwarded to Bike Cleveland:

Our crews painted Detroit from West 25th to West 45th, the bike lane lines are painted, symbols and transverse lines will begin to get installed next week.  The remainder of Detroit painting from West 45th to Lake will be completed next week.

We have set temporary zones in a couple of locations to prevent cars from driving into parking lanes that will be painted off with transverse lines next week.

Here is a photo of the lanes prior to the installation of the bike symbol: 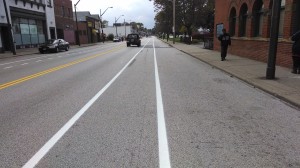 Once complete the new bike treatments on Detroit Avenue will go from W. 25th Street to Lake Ave. It is also important to note that the striping the is down now is only temporary. Crews will be back out in spring of 2014 to put down the more visible thermoplastic lines.

Posted November 4th: Here is a news article from NewsNet5.com on the installation of the bike lanes: http://www.newsnet5.com/dpp/news/local_news/oh_cuyahoga/cleveland-installing-official-bike-lanes-on-detroit-avenue

Thanks to everyone who signed our Detroit Bike Lane petition and mailed in postcards at Bike to Work Day. Below is the official statement from the City of Cleveland Mayors office from Chief Ken Silliman. We will continue to monitor the progress and keep you updated, feel free to sign the petition below to express the need to have the project completed in 2013.

In response to your questions regarding the timeline for the striping of Detroit Avenue bike lanes, I have the following response.  It did take us a long time to settle on the specifications for the work, as we had not previously bid out lane striping to an outside contractor.  In addition to taking time to determine the proper specifications, we also made a midstream change to convert the contract to a requirement contract (that decision will enable us to add West 41st Street and West 44th Street to the scope of work if we so choose).

That said, our current focus in Mayor Jackson’s office is the timeline between now and the completion date for the work.  There is a September 5, 2013, pre-bid conference and a September 20, 2013, bid date.  Assuming that there is a lowest responsible bidder that proposes a price within our budget and is compliant with Office of Equal Opportunity requirements, we in the Mayor’s Office will encourage all involved City departments to process the remaining steps—OEO recommendation, Board of Control authorization, contract execution, and notice to proceed to the contractor—as quickly as possible without sacrificing essential due diligence.  Then, weather permitting, we will make every effort to complete the striping before the first snow falls in 2013.

Detroit Avenue is one of the highest bike commuting corridors in Cuyahoga County, according to bike counts conducted by NOACA.

It is now Fall of 2013 and there are still no bike lanes on Detroit Avenue. Because of the delay mounting frustration has led to a series of resident led actions to show the city the importance of installing bike lanes on Detroit Avenue. You can read about these actions and Bike Cleveland’s response here: http://www.bikecleveland.org/2013/08/26/detroit-avenue-guerrilla-bike-lanes/

To understand why it has taken over a year to install 1.7 mike of bike lanes on Detroit Avenue Bike Cleveland got 84 residents to sign postcards at Bike to Work Day that were sent to Mayor Frank Jackson asking “Where is the Detroit Avenue Bike Lane?”

We also encourage you to take action by signing the below petition (feel free to customize), which will be sent to Mayor Jackson, asking him and his administration to prioritize and expedite the installation of the Detroit Avenue bike lanes in September of 2013.