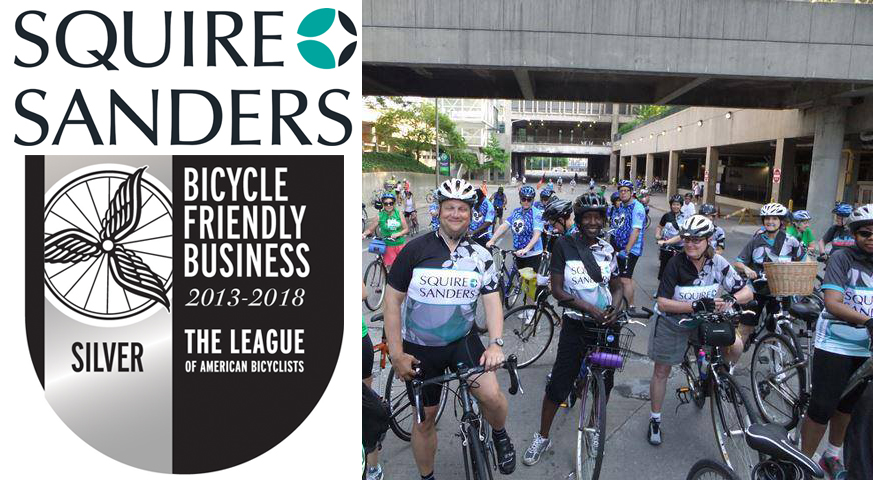 Squire Sanders has been named a Silver-Level Bicycle Friendly Business (BFB) by the League of American Bicyclists, becoming the first business, community, or university in Northeastern Ohio – and only the fourth in Ohio – to receive the silver-level designation.

“We are honored to be awarded the silver-level designation by the League of American Bicyclists, and to be a role model for other firms and businesses to follow,” said David S. Goodman, Managing Partner of the Squire Sanders Cleveland office. “Squire Sanders strives not only to apply green practices within our offices and surrounding communities, but also to emphasize and promote the importance of a healthy lifestyle and work environment.”

Squire Sanders joins a cutting-edge group of more than 650 businesses, government agencies, and Fortune 500 companies across the United States that are transforming the American workplace. This year there were 80 new and renewing BFBs in 29 states and Washington, DC.

“Visionary business leaders are recognizing the real-time and long term impact that a culture of bicycling can create,” said Andy Clarke, President of the League of American Bicyclists. “We applaud this new round of businesses for investing in a more sustainable future for the country and a healthier future for their employees.”

Three years ago, Squire Sanders employees in the Cleveland office formed a Bike Committee, comprised of both recreational and commuter cyclists, who meet monthly to work on various initiatives to make the office more bike friendly as well as engage the cycling community within and outside the firm. Squire Sanders encourages bicycling for recreational and commuting purposes and provides employee amenities such as free access to shower, locker, and bike storage at downtown Cleveland’s bike commuter station, The Bike Rack, which is sponsored by Squire Sanders. Squire Sanders also worked with Key Tower to provide conveniently located covered bike racks in the parking garage attached to its office building. The Bike Committee along with other Squire Sanders employees organize and participate in numerous bike-related events throughout the year, including Bike to Lunch outings, Family & Friends Bike Outings, the United Way’s RideUNITED, Bike to Work Days, the Cleveland Metropolitan Bar Association’s David Webster Greener Way to Work Day, and the Bike Cleveland Bike Challenge.

“Squire Sanders understands the benefits of supporting and advocating for a strong bicycle culture both within their firm and across Greater Cleveland,” said Jacob VanSickle, Executive Director of Bike Cleveland and a member of Squire Sander’s Bike Committee. “Over the past three years they have become a model company building a culture that supports and encourages people to ride a bike for better health and a more sustainable city. We are excited to call Squire Sanders both a supporter of Bike Cleveland and Greater Cleveland’s first ever silver-level Bicycle Friendly Business.”

To apply or learn more about the free BFB program, visit the League of American Bicyclists. If you need support in making your business more bicycle friendly contact Bike Cleveland at info@bikecleveland.org.

About Squire Sanders: Squire Sanders is one of the world’s strongest integrated legal practices with more than 1,300 lawyers in 39 offices across 19 countries. Widely acknowledged for its international reach and diverse sector expertise it advises every type of business from fast-growth companies and the established global mid-market to Fortune 100 and FTSE 100 businesses, together with regional and national governments.  For more information, visit www.squiresanders.com.