The Future of Bikes on Public Square?

At some point this week during the preparation for the reopening of Public Square – the bicycle markings within the shared lanes disappeared – deeply scrubbed from existence.  The signage vanished from the roadsides as well. 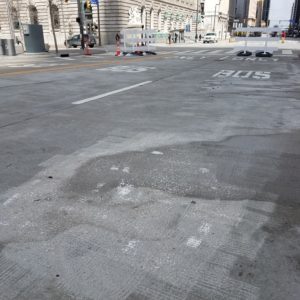 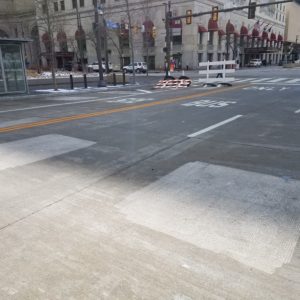 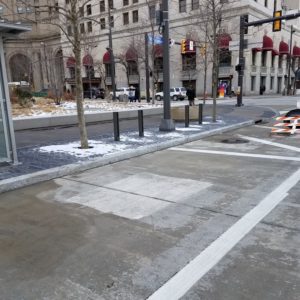 It didn’t take long for the inquiries to begin coming our way.  Social media followers and members of the press began to field questions to us, and to the city.  Superior Avenue has been identified as a priority bike route through downtown in the 2014 Bike Facility Implementation Plan and the 2007 Bikeway Master Plan, and we have been working with RTA and the city to ensure that bicycles were integrated into Public Square since 2015. Naturally, a change like this without any warning raised immediate concerns.

We reached out to Robert Mavec, Cleveland Streets Commisioner, and this is what he had to say:

While we appreciated the answer to the question as to why they disappeared without warning, we did pose some follow up questions (yet to be answered) about the future of bicycles in Public Square:

When these questions are answered, we will return with a follow up.  Our hope is that the city holds to its commitment of keeping Superior Avenue open to bicycle traffic.  We are currently working with developers on exciting new business and residential properties here on the near west side that include commitments to built-in bicycle infrastructure that are so key to modern redevelopment. To have a future where a main artery of the city is off limits to cyclists coming across to downtown would be tragic.