Bike Cleveland is advocating for a city-wide bike sharing program.

Bike sharing programs provide networks of public bikes that people can rent and use. Cities as diverse as Washington DC, Minneapolis, and Chattanooga have implemented bike sharing programs successfully, getting more people on bikes across the country. 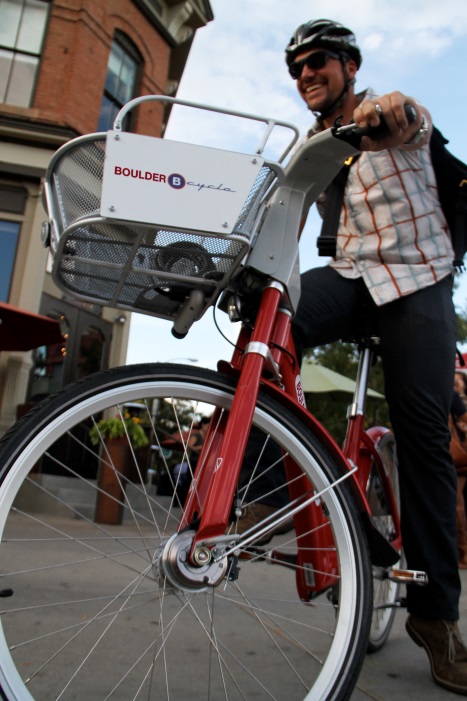 Across the U.S., cities are embracing an innovative approach to urban mobility which combines the flexibility of a bicycle with the accessibility of public transportation. Bike share is ideal for short distance point-to-point trips providing subscribers access to bicycles at any self-serve bike station to use and return to any bike station within the system’s service area. Bike-sharing implementation in urban areas has been seen to positively affect how residents, employees, and visitors experience a city. Bike-transit systems allow for more people to access cycling for short trips, replace vehicle use, cycle for fitness and recreation, and for tourists and residents alike to explore a city.

Bicycling in Cleveland has been on the rise – the most recent Census numbers indicated an increase of 280% from 2000 to 2010 in the number of people commuting to work by bicycle. Because of the region’s growing bicycle culture, continued investment in downtown Cleveland, and the City’s commitment to becoming a bicycle friendly community, the Mayor’s Office of Sustainability is exploring the feasibility of implementing a bike share system in Cleveland.

Bike Share has been deemed feasible in Cleveland. Cleveland exhibits many of the characteristics that are conducive to establishing a bike share program. Those include: 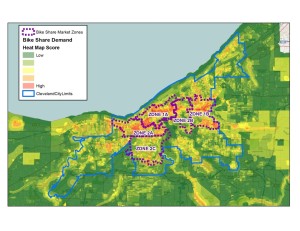 Although Cleveland exhibits a variety of conducive characteristics for bike share, there are also some challenges. While its bicycle infrastructure continues to grow, there are still some connectivity issues that would be best mitigated by providing a more robust network of comfortable bike routes within neighborhoods and improving connectivity between them. Additionally, the City could promote opportunities for linking transit trips with potential bike share trips.
Based on a complete analysis of land use, population data, stakeholder engagement and public input, the City could support a system of between 770 and 1,400 bikes and between 77 and 140 stations in 5 defined market areas. The proposed system would have a dual core situated in Downtown and University Circle and expand into Midtown, Ohio City and Tremont. These locations offer the highest potential demand for bike sharing.

A general business model for the bike share system should be adopted to include some combination of public and non-profit ownership, administration and operation of the system. The largest obstacle is finding and/or creating organizational capacity and leadership to take on the responsibility of procuring and managing the system. It is therefore recommended that the City continue engagement with local stakeholders including the RTA to possibly partnering on implementing the bike share program. Depending on this interest, the City could then issue an RFP for operating the system or an RFI to register their interest to own, administer, and operate the system.

Based on the findings of the Feasibility Study, the Cleveland Mayor’s Office of Sustainability in partnership with the Bike Share Task Force commissioned an Implementation Plan based on a mid-range system build out of 1,100 bikes and 110 stations to be rolled out in several phases shown in Table 1.

The Implementation Plan identified goals and objectives for the program, evaluated and recommended a preferred business model, prepared a financial analysis to understand system costs and revenues, and assessed other implementation considerations required prior to launch. These elements are summarized below.

Goals and objectives for the potential bike share system in Cleveland were developed in consultation with local stakeholders, who responded to an online survey to identify potential system goals.

Operational excellence, livability and economic vitality, financial performance and transparency, social and geographic equity, and health and safety were identified goals and were used to evaluate potential business models.

There are several common business models used in the United States that define who is responsible for ownership, implementation, management, and operation of the bike share program.

The Bike Share task force is currently completing a business and implementation plan and devising a stakeholder outreach strategy. They anticipate completing this step in January 2014.