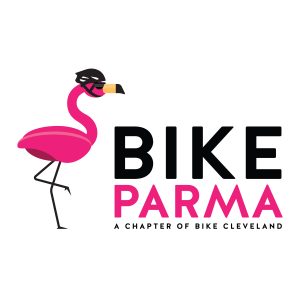 Bike Parma, a Chapter of Bike Cleveland, was formed in early 2018 by some passionate folks who proudly reside in Ohio’s seventh largest city (by populace). Ironically enough, it was an anti-cyclist comment made on the city’s social media page that made us say: “Hey! Why the heck can’t Parma be pro-cycling?” With that, Bike Parma was born.

Although not necessarily viewed as a pro-cycling city…yet, our founders feel Parma is an ideal city to support a thriving cycling community. Our biggest goal is to promote cycling and bike safety in Parma and the neighboring areas of Parma Heights and Seven Hills. We want to get more people riding bikes through our massive gridwork of neighborhoods, beautiful parks and even on the main streets. In addition, we want to educate drivers and cyclists alike on the laws regarding riding on the roads while also respecting one another.

The second portion of our goal involves advocating for cycling infrastructure in Parma, Parma Heights and Seven Hills, which we hope will improve views toward cycling on city streets. We want to begin our plan by adding sharrows to the main streets and signage to make drivers aware that cyclists can legally use the road. Additionally, installing bike racks in key city locations can help influence and promote bike travel around town. Lastly, we plan to hold small events for residents and visitors such as bike rodeos, and group rides; eventually leading to larger rides such as a Slow Roll or Critical Mass that go through or end in Parma.

UPDATE: We have made the difficult but necessary decision to postpone all April 18th Opening Day for Trails events until further notice. The health and safety of the trails community—our team, our partners, and all of you—is and always will be our top priority. For this reason, we feel it is our responsibility to do […]

Cleveland’s cycling community is once again gathering food for disadvantaged families and senior citizens this holiday season! Bike Cleveland and Bike Parma are hosting Cleveland’s eighth-annual Cranksgiving, a food drive by bicycle that begins and ends at the Parma Hunger Center. There is no cost to join the event, but cyclists usually spend about $15 […]

Our founding group includes a wide range of cyclists, who all share a common enjoyment of being on their bikes. Whether it’s daily commuting, exercise or pleasure, we want to feel safe while doing it. We believe we are all drivers and if we work together with the city, its citizens, its drivers and its cyclists, we can make Parma the bike-friendly community it should be.

Check out our Facebook page for resources, updates and information on our future events. We look forward to seeing you out and about!